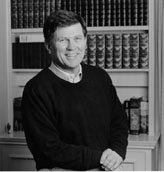 David Kennedy is Donald J. McLachlan Professor of History, Emeritus, at Stanford University. His research and writing focus on integrating economic and cultural analysis with social and political history. His books include Over Here: The First World War and American Society (1980), which used American involvement in World War I to analyze the American political system, economy, and culture in the early 20th century, and Freedom From Fear: The American People in Depression and War (1999), which recounts the history of the United States in the two great crises of the Great Depression and World War II.