Allow students to see that history as we know it is interpretation, perspective, and bias.

Kyle Ward is the Director of Social Studies Education at St. Cloud State University in Minnesota. He is the editor of two books on history education published through The New Press: History Lessons (2004) and History in the Making(2006). 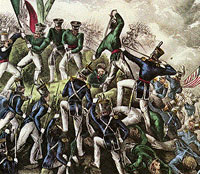 Many students think of history as monotonous lectures, boring textbook readings, and a series of names and dates to memorize for a test. Students rarely learn about the concept of historiography, the study of how history has been written and how social change has influenced the way that people perceive historical events.

Analyzing textbooks from a historiographical stance allows students to see that history is more about interpretation, perspective, and bias than about rote memorization. By looking at how textbooks from different eras describe a certain event, such as the Mexican-American War, students learn about the choices that textbook authors make. For example, do the textbooks depict the U.S. as the aggressor, as an unwilling participant forced into a conflict by enemy antagonism, or something in between?

In this best practice, students look at how high-school history textbooks from different eras have portrayed the same event. Here, we use the 1846 outbreak of the Mexican-American War as an example, but teachers can apply the approach to many other historical topics.

1. Ask the class to explain what they know about the Mexican-American War (18461848). Show a map of the United States before the outbreak of war to prompt this discussion. (A before-and-after map can be accessed from Establishing Borders: The Expansion of the United States, 18461848)

2. Students read their textbook's section on the causes of the Mexican-American War. Discuss with the class the authors' interpretation of what caused this war and then compare it to their own perspectives.

3. Students look at old and new high-school history textbooks to see how the war is portrayed. Students can create a list or Venn diagram in order to identify the similarities and differences between these textbooks and their own textbook. Two excerpts are included below—for additional excerpts, ranging from 1849 to 1995, see the book History in the Making, by Kyle Ward (listed under Resources below).

A 1911 history textbook seems to blame Mexico for hostilities.

Texas had now come into the Union, but there was still trouble with Mexico. That country seemed bent on a quarrel. President Polk did not desire it, he made an effort to settle the question by treaty; and this might have been done had Mexico been willing to yield certain points. "Texas has no right as an independent state to seek and receive admission into the United States," she said. And then she insisted that the dividing line should be the Nueces River, while Texas laid claim to the Rio Grande.

President Polk, fearing an attack, sent General Zachary Taylor to the disputed territory. And not many days passed before General Taylor received a letter from the Mexican general, Ampudia. "Your Government has not only insulted but has provoked the Mexican nation," he wrote, "and in this case, by orders of my Government, I require you to break up your camp and retire to the other bank of the Nueces River. If you insist upon remaining upon the soil, it will clearly result that arms, and arms alone, must decide the question."

What was General Taylor's answer? "The instruction under which I am acting will not permit me to go back from the position I now occupy. I regret the alternative which you offer, but, at the same time, wish it understood that I shall by no means avoid such an alternative, leaving the responsibility with those who rashly commence hostilities."

It was not long after this that war was declared. General Taylor did not wait for more soldiers to arrive, but marched on and defeated the Mexicans near the mouth of the Rio Grande, although they outnumbered him. The enemy fled across the river, but Taylor pursued them and captured Matamoros. He then moved up the Rio Grande to besiege Monterey, one of the most strongly fortified cities of Mexico.

In 1995, a history textbook shows disagreement and division over the war with Mexico.

In January 1846, Polk ordered General Zachary Taylor to cross the Nueces River and set up posts along the Rio Grande. Polk knew that Mexico claimed this land and that the move might spark a war. In April 1846, Mexican troops crossed the Rio Grande and fought briefly with the Americans. Soldiers on both sides were killed.

President Polk claimed that Mexico had "shed American blood upon the American soil." At his urging, Congress declared war on Mexico. Americans were divided over the war. Many people in the South and West wanted more land and so were eager to fight. Northerners, however, opposed the war. They saw it as a southern plot to add slave states to the Union.

4. After they finish reading, students explain what they found. So, what's different between the two accounts above?

Take a look back at the accounts of why the war started. Mexico, according to the first textbook "seemed bent on a quarrel," and President Polk was only reluctantly drawn into war. In the second and more recent account, however, President Polk orders General Taylor to occupy land claimed by Mexico, well aware of the fact that this could be interpreted as a declaration of war. What might account for these two different versions of the story?

Now take a look at the accounts of the two generals in the textbooks. In the first one, the conflict has a clear villain—Mexico's belligerent General Ampudia—and a clear hero—the outnumbered and ultimately victorious Zachary Taylor. But in the more recent textbook, things seem much less black and white and President Polk is portrayed as using the loss of American lives as an excuse for gobbling up Mexican territory.

This sort of comparative reading is an entry into asking students to think about the impact that society, economics, and politics have on the authors' perspectives and how these perspectives may have influenced historians' interpretations of the Mexican-American War.

Why is this a "best practice?"

Students will quickly see that there are many interpretations of an event. They will identify numerous disagreements between their own perspectives on history, their current history textbook, and textbooks from previous eras. This assignment allows students to see and discuss the impact that interpretation, bias, and perspective all play in how people learn about and understand history.