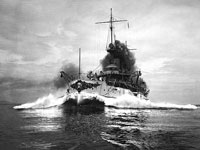 Was America's shift away from a predominantly isolationist foreign policy stance a historical inevitability or did Theodore Roosevelt and his persuasive image as a leader push us into the modern age of global interaction?

Political, social, economic, and cultural forces were at work at the time, but Roosevelt's actions, undertaken consciously and intentionally, had important consequences as well.

The conventional wisdom that America was generally "isolationist" until the end of the 19th century has some severe limits. It is only true if it means that the United States was reluctant to become involved in European politics (as opposed to European business, manufacturing, and trade relationships, which the U.S. was not so reluctant to engage in, despite the imposition of protectionist tariffs).

The reluctance derived from the fact that European immigrants to America, from the very beginning, had often fled to escape Europe. For them, America was a place apart, free of the "entangling alliances" (Jefferson's phrase) of entrenched interests, monarchies, and religious restrictions. The idea was fortified by geography, with oceans separating the Old World and the New.

The problem with the idea of "American isolationism," however, comes when it is taken to imply that the policy of the U.S. during this time was "peace with each other and all the world" (as President Polk said during his inaugural address) or that it was guided exclusively by the simple desire not to interfere with other peoples' lives. If the U.S. relationship with North American indigenous peoples is not evidence enough to the contrary, its relationship with Mexico throughout the 19th century—well before the Spanish-American War—should demonstrate that the U.S. did not refrain from interfering with other peoples' lives or other country's policies or from exercising military power over them.

The Northern victory in the U.S. Civil War and the consequent abolition of slavery, appeared to justify the use of state power to impose solutions to social problems, to demonstrate that social progress could be engineered by the state. This was the essence of "Progressivism," and, as a political or social philosophy, it was a departure from the deep-rooted American suspicion of, and aversion to, a strong central state power. Progressives sought first to uplift and re-order America, but then turned their view outward, especially with the emergence of a popular view that the valued American pioneer "spirit" would diminish as the westward settling of the continent reached the Pacific Ocean.

The Progressives contemplated doing unto other lands what they were already doing to their own; or, as Mark Twain sarcastically put it, "extending the blessings of civilization to our brother who sits in darkness."


The U.S. did not refrain from interfering with other peoples' lives or other country's policies or from exercising its military power over them.
American Action Abroad Dependent on Strengthening Naval Power

Nevertheless, if we limit ourselves to considering American actions overseas, then a sea change of sorts did occur toward the end of the 19th century. America deliberately fashioned itself into a formidable naval power. U.S. Naval officer Alfred Thayer Mahan encapsulated the rationale for this in his highly influential book, The Influence of Sea Power Upon History, published in 1890.

Not surprisingly, America's overseas reach was made possible by a large effort to expand and modernize the U.S. Navy, which began under President Chester A. Arthur in 1882, 16 years before the Spanish-American War. President Arthur also negotiated with the Kingdom of Hawaii the right to use Pearl Harbor as a coaling station for U.S. Navy ships.

It was also in 1882 that young Theodore Roosevelt published his first historical book, The Naval War of 1812. He was friends with Mahan and shared his view of the need for the U.S. to develop its navy. President William McKinley appointed Roosevelt to the post of Assistant Secretary of the Navy in 1897. He resigned the following year to fight in the Spanish-American War.


America's overseas reach was made possible by a large effort to expand and modernize the U.S. Navy
Foreign Trade

Counting the value of foreign commerce in the leading commercial nations from 1870 to 1890, the U.S. ranked 4th behind the United Kingdom, Germany, and France.

From 1850 to 1890, the dollar value of U.S. total imports and exports rose from $318 million to $1.3 billion, an increase of 400 percent. As America's own industries grew in the 2nd half of the 19th century, the percentage of manufactured goods (as opposed to raw materials) exported also grew.

Filibustering around the Americas

During this period, American business entrepreneurs in the Pacific and in Central and South America began to venture deeply into local political and even military affairs. Actions sometimes reached far beyond mere business activities, including the organization of "free lance" military expeditions called "filibusters" against governments in the Caribbean and Central and South America.

American companies, such as the United Fruit Company, came to own vast plantations in these countries and operated them as agricultural colonies. They often pressured the U.S., especially throughout the 1st half of the 20th century, to intervene militarily in countries such as Nicaragua, Honduras, and Haiti when their interests were threatened by local wars and revolutions.

America across the Pacific

The pattern of American commercial interests supported by American military power had already been set by the beginning of the 20th century. Hawaii was first annexed to the U.S. in February 1893, after immigrant businessmen and politicians from the U.S., including Sanford Dole (his cousin James would become the "Pineapple King") ousted the Hawaiian royalty, with the backing of U.S. diplomats and soldiers. The annexation was withdrawn, but was re-instituted under President McKinley in 1898, with an eye toward using Hawaii as a naval base in the Pacific to fight Spain in Guam and the Philippines.

In the Spanish-American War of 1898, naval power was decisive to the U.S. victory. Quasi-colonial competition between the U.S. and Spain was one factor in the war, as well as an ambivalent notion in the U.S. that it was expelling Old World domination (Catholic and monarchical) from the New World. This in theory helped to free the hemisphere for democratic revolution and republicanism, while at the same time advancing U.S. economic and political power over the same region.

The end of the war saw the U.S. emerge as a fully-fledged, although ideologically conflicted, colonial power. That ideological conflict regarding the destiny and direction of American foreign policy would continue through the 20th century. This new era of foreign involvement was underway before Theodore Roosevelt held any national elected office.

Practically speaking, of course, the U.S. had no way to become militarily entangled in Europe—even if it had wished to—until it had a navy and commercial fleet capable of protecting its own shores, but more importantly, capable of transporting troops and supplies across the Atlantic.

As the Republican Vice Presidential candidate in 1900 campaigning for McKinley's second term, Roosevelt publicly argued in favor of the annexation of the Philippines, contending that both the Philippines and the U.S. would benefit.

After McKinley was assassinated in 1901 and Roosevelt became President, he built the "Great White Fleet," four battleship squadrons of new naval ships. He then dispatched them around the world from 1907-1909 on a mission of friendship and goodwill, but with a subtext of demonstrating that the U.S. had come of age as an international naval power.

Roosevelt also strengthened and extended the Monroe Doctrine in his 1904 address to Congress. He claimed that the U.S. had the right to intervene—to exercise "international police power"—in the economic affairs of Central American and Caribbean nations in order to stabilize them. This claim became known as the "Roosevelt Corollary" to the Monroe Doctrine.

Roosevelt had wide support in the U.S. for his foreign policy bullishness, although strong and significant opposition existed against actions that appeared to be at odds with the country's own republican ideals.

He quickly recognized the legitimacy of Panamanian rebels to separate from Columbia, and he committed the U.S. to protect their independence. But this (and the U.S.'s negotiated lease for the Canal Zone) suggested an action quite at odds with the country's refusal to allow states to secede from the Union during the Civil War.

Roosevelt, however, was convinced that a canal would be built across the Isthmus of Panama and that the U.S. must control it. During the war, American ships fought in the Atlantic and the Pacific. Transferring the fleets from one ocean to the other meant sending ships around Cape Horn, a difficult, expensive, and time-consuming operation. When the canal was finished, thought Roosevelt, only if American controlled it, could the U.S. ensure its ability to defend both of its own coasts.

All of Roosevelt's actions fortified the outward-looking expansive trend in U.S. foreign policy. Roosevelt's decisions, such as undertaking the Panama Canal project and strengthening the Navy, had long term consequences for the U.S.

U. S. Treasury Department. Annual Report and Statements of the Chief of the Bureau of Statistics on the Foreign Commerce and Navigation, Immigration, and Tonnage of the United States for the Year Ending June 30, 1890. Washington: Government Printing Office, 1891.