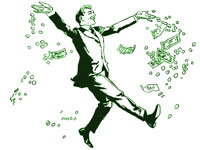 Reagan campaigned on the promise to cut taxes and reduce the size of government. He believed that growing business would have a beneficial effect on the entire economy, or, as he put it, "A rising tide lifts all boats."

When he became President in 1981, the main economic problem he faced was a high rate of inflation, or, as he described it, "too many dollars chasing too few goods." The "supply side" policy he adopted was to stimulate the non-government portion of the economy, which was the goods-producing portion, while not trying to solve the problem simply by reducing the money supply, the traditional way for the government to combat inflation. Reagan meant to allow business to expand and lower consumer prices and consequently lower unemployment and increase the growth of wealth in the private sector. The theoretical means to reach that goal were:

1. Reduce the growth of government entitlement programs.
2. Reduce government discretionary spending, which meant shrinking government agencies.
3. Reduce the public debt by cutting deficit spending and tightening the money supply, which was meant to strengthen the dollar and reduce inflation. Having the Federal Reserve tighten the money supply was not, strictly speaking, a "supply-side" technique, however.
4. Reduce the cost of doing business by lowering capital gains taxes, thereby increasing manufacturing output (the "supply" in "supply side").
5. Increase the amount of money in the hands of consumers by lowering income taxes.
6. Reduce the cost of doing business by reducing regulation, which was also intended to promote business competition, ultimately lowering consumer costs.
7. Reduce or eliminate government guarantees, subsidies, and price supports, which was meant to allow the free market to determine the cost of doing business and businesses to thrive or fail without interference.

In practice, however, not all of this occurred. Some of this was impossible to achieve for political reasons and some of it did not produce the anticipated effects.

Also, total government revenues did increase, despite the fact that the top marginal rate of tax in the U.S. fell from 70% to 28%, beginning with the Kemp-Roth Tax Cut of 1981. Some "supply-siders," proposing what their opponents called "Voodoo economics," hoped that cutting taxes drastically would, in and of itself, increase the government's revenues by more than the amount it would lose from the rate reduction. Economists generally agree that that did not happen and attribute some or most of the rise in government revenue after the era's tax cuts to other causes.

Critics also point out that the government's budget deficit rose dramatically during Reagan's term in office. The government's overall discretionary spending was cut, but defense spending grew, as did non-discretionary spending, such as for Social Security. Reagan's budget director, David Stockman, a "supply-sider" in general, believed that just cutting tax rates would not help balance the government's books, and that it was at least as important to cut government expenditures, such as agricultural subsidies, Social Security payments, and even the defense budget. He was disappointed that these cuts were politically impossible to make.

David Stockman. The Triumph of Politics: How the Reagan Revolution Failed. New York: Harper and Row, 1986.

William Greider. "The Education of David Stockman," The Atlantic (December 1981).