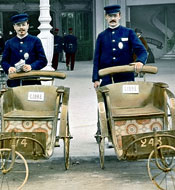 In January 2008, Flickr, the web's largest photo-sharing site, launched The Commons in cooperation with the Library of Congress. The Commons is designed to increase access to publicly-held photography collections housed in museums and archives and to encourage public response to these collections.

The Flickr Blog gives background for some of these collections and the institutions that house them. The photographs have inspired historical projects and research as well as prompting comments from viewers. This mashup, for example, combines historic photographs from the Powerhouse Museum in Australia and Google maps to create "then and now" views of Sydney, Australia.