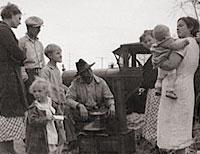 What makes the New Deal and Franklin Roosevelt's presidency particularly exciting to teach in history classrooms today? In part, apparent parallels between current events and history. The downward spiral of the Dow Jones, continued news about job layoffs, failures of financial institutions, economic stimulus plans, and executive and legislative initiatives evoke the specter of the 1930s.

The internet is full of classroom resources for teaching about the New Deal—arguably, perhaps more than for any other era. We've highlighted a few below that serve as gateways to this internet wealth and a few that address specific subjects and content.

During his first 100 days in office, President Roosevelt set an unprecedented legislative pace, sending 15 requests to Congress for action—all of which Congress passed. How FDR Made the Presidency Matter (The New York Times, January 16, 2009) summarizes Roosevelt's record-breaking legislative achievements. (This article is an entry in The Times 100 Days Blog that offers a historical perspective of the first 100 days in office of five 20th century presidents: Franklin Roosevelt, John Kennedy, Lyndon Johnson, Richard Nixon and Ronald Reagan. Blog entries compare their experiences with those of President Obama.)

Don't miss this! The March edition of History Now, a quarterly journal from the Gilder Lehrman Institute of American History, focuses on multi-faceted approaches to learning about and to teaching the Great Depression. In this issue: The Great Depression: An Overview, historian David Kennedy roots the causes of the economic crisis in World War I and discusses the state of the nation during the 1920s, and the New Deal and its effects. Other content areas include lesson plans for elementary through high school including women, the Dust Bowl, migrant farmworkers, popular culture; an exhibit from New York's Lower East Side Tenement Museum; and a variety of additional resources from historians, archivists, and educators.

Annenberg Media's series, America's History in the Making, the film, Film 18, By the People, For the People looks at how a new relationship between individuals and the government arose in the face of plummeting agricultural exports, the stock market crash, and environmental disaster all led to an unprecedented economic depression. Sign up for Video on Demand, a free service of Annenberg Media, in order to access series films.

According to A New Deal for the Arts, an exhibit from the National Archives, during the depths of the Great Depression of the 1930s and into the early years of World War II, the Federal government supported the arts in unprecedented ways. For 11 years, between 1933 and 1943, federal tax dollars employed artists, musicians, actors, writers, photographers, and dancers. Never before or since has our government so extensively sponsored the arts. These archival materials explore categories of art—visual artists, writers, filmmakers, for example—and discuss examples and their creators.

Picturing U.S. History: an interactive resource for teaching with visual evidence, is a digital project from City University of New York and funded by the National Endowment for the Humanities. Developed on the premise that visual materials are vital to understanding the American past, Lessons in Looking, a guide to Web resources, forums, essays, reviews, and classroom activities, helps teachers incorporate this visual evidence into their classrooms. In March 2009, George Mason University professor, Barbara Melosh focuses on teaching the Great Depression through photographs, political cartoons, comics, graphics, prints, and posters. A series of thoughtful essays and comments describes, annotates, and contextualizes selected visual works from the 1930s.

Best History Websites: US History Great Depression may be the gateway motherlode. This briefly annotated list is divided into three sections: Great Depression in the News; General Information; and Lesson Plans, Teacher Guides, Activities and More. Among the helpful resources: Teaching K-12 Economics and Taking Stock in the Past for the Future: Examining the Causes and Effects of the 1929 Stock Market Crash Through News Coverage in The New York Times, a 1999 lesson plan from New York Times Learning Pages.

New Deal Network is an educational guide to the Great Depression of the 1930, sponsored by the Franklin and Eleanor Roosevelt Institute and the Institute for Learning Technologies at Teachers College/Columbia University and funded in part through a grant from the National Endowment for the Humanities. Document Library. The site is both a gateway and a resource center to just about any imaginable resource on The Great Depression, and includes Lesson Plans, K-12. (NHEC's Lesson Plan Reviews evaluates the approach of one of the Network's lesson plans for elementary school, Children's Letter's to Mrs. Roosevelt).

At Edsitement, the lesson plan, Worth a Thousand Words: Depression-Era Photographs, gives guidelines for working with the image library of the New Deal Network.

America in the 1930s, a project, developed by the American Studies Program at the University of Virginia, allows visitors to view the 1930s through films, radio programs, literature, journalism, museums, exhibitions, architecture, art, and other forms of cultural expression. The site itself is best for students in high school and above; however, it contains excellent resources, such as audio of 1930s radio programs, that teachers can use with students of any age. Materials are most easily accessed through the organized Site Index.

The H-net discussion group, H-US1918-45: the New Deal Era and Its Origins offers an extensive cafeteria of Resources for Teaching. It's a gateway to a variety of materials spanning World War I through World War II. Resources include course syllabi for college and university classes (including that of noted 20th century historian, Alan Brinkley) which, in turn, lead to further web-based resources; categorized links to primary source websites, photographs and images, posters, maps, audio files and video from American Memory and History Matters, The Crash, FDR Archives, and more.

The online interactive exhibit, A New Deal for Texas Parks demonstrates local impact of New Deal Programs—in this case, the Civilian Conservation Corps, who constructed the first state parks in Texas. Visitors are invited to flip through the pages of the scrapbook to explore how individuals, communities and landscapes in Texas were impacted by the New Deal Era, to explore primary source materials (including music, oral history videos, and newsreels) and to create a personal scrapbook of materials. The exhibit is thematically organized, and at the beginning of each thematic chapter, a PDF file with questions guides content exploration.