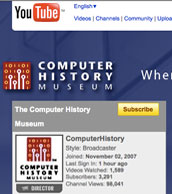 Numerous museums have launched channels on YouTube. The result? Videos of lectures, oral histories, exhibits, and digital archives with accompanying commentary and analysis are available with the click of a mouse. One avenue to find them is simply to use the search term museum and select the Channels option.

Art repositories—always amazing sources for visual and material cultures for the history classroom—outnumber history museums, but you'll find the following:

The Newseum, located in Washington, DC, has posted 69 videos, including a series of brief clips (30 seconds to two minutes) on how journalists reported the assassination of Abraham Lincoln.

The Computer History Museum channel focuses on the communications revolution and the role of the computer. Videos include talks by legal historian Lawrence Lessig and other prominent scholars; videos from the American Academy of Arts and Sciences March 2009 Symposium on the Impact of Information Technology on Society: Technology and the Future of the Book; and historic views of computers through time.

The Library of Congress channel includes historic films, lectures, and public talks. The channel includes historic film clips, some only a few seconds long, demonstrating early filmography—others, such as a 14-minute mini-documentary on Rosie the Riveter, highlight collections with commentary from curators and archivists. Bibliographic and explanatory materials accompany each item. According to the Library Blog, playlists will continue to grow, just as the Library has continued to expand its Flickr pilot project during the past several months in order to make resources and collections increasingly accessible to the public.

Howard Zinn, the People's Historian, Dies at 87
From the Atlantic Monthly: What Makes a Great Teacher?
Especially for Teachers: Annenberg Media's Online U.S. History Textbook
Black Americans in Congress
Elizabeth Schaefer on Facebook in the Classroom
Bookmark This! Teacher Resources at the Library of Congress