A professor of Social Science Education at the University of South Florida in Tampa, Barbara Cruz focuses on multicultural and global perspectives, teacher preparation, and Latinos in education.

A professor and chair of the Department of Secondary Education at the University of South Florida, Steve Thornton’s scholarly interests are in the field of curriculum and teacher education, especially the study of history and geography. He is the author of Teaching Social Studies That Matter. 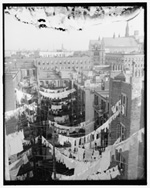 Teaching history to English Language Learners poses special challenges owing to its conceptual density and assumed cultural knowledge. It seems obvious that ELLS need additional support and materials to understand content, yet many social studies classrooms are ill-stocked in this regard. Here we outline how visuals can help ELLs build interest and understanding. Rationale Although visuals make excellent learning tools for all students, beginning speakers of English may be able to secure meaning from visual sources they would be incapable of extracting from written sources. By visuals we mean, for example, photographs, graphs, maps, globes, charts, timelines, and Venn diagrams as well as the observation of artifacts and landscapes. Description Consider the following images of tenements at the turn of the 20th century. In the case of New York City, the poor, the unskilled, and in many cases, immigrants, found cheap housing in tenements—rental apartment buildings that were often in disrepair or even unsafe. Large families, or sometimes multiple families, lived in cramped, unhealthy conditions. Infant mortality was high, alcoholism common, and the tenements were a breeding ground for crime. Students can come to understand many of these social phenomena by viewing photographs taken during this time period. Example

[Yard of tenement, New York, N.Y.], c. 1905, Detroit Publishing Company Photograph Collection, Library of Congress: LC-D4-36489 Examine this photograph of a New York City tenement taken between 1900 and 1910 and use the questions to analyze it. The categories used for questioning the sequence is a way to classify stages of speech emergence. The aim is to align linguistic ability with teaching strategies. [See handout.]

Tenement apartments were also used for work. Already-crowded apartments often doubled as tenement shops, employing as many as 30 workers. Examine this image of an Italian family making artificial flowers in a tenement building:

Ask why people would use their living quarters as both dwelling and workplace. Which family members might be more likely to participate in the work? In conclusion, meaningful historical investigation is an achievable goal for English language learners in the self-contained classroom. While we make no claims that this is a completely painless process for either students or teachers, we have presented ideas on meeting the needs of ELLs while remaining faithful to conceptual learning objectives.