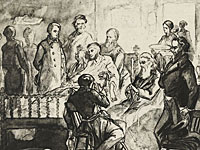 Did President Lincoln actually foretell his death to a reporter the day before he was killed?

Lincoln's former law partner, Ward Hill Lamon, who accompanied him as a bodyguard on his train ride through Baltimore at the beginning of his presidency and remained as a friend and occasional bodyguard until Lincoln's death, wrote that he was among the "two or three persons present" when the president related a disturbing dream he had "only a few days before his assassination." Lamon's account appeared in a book of anecdotal reminiscences compiled by Lamon's daughter and published in 1895 two years after his death. Some of the writings had appeared previously in newspapers, others came from Lamon's letters and an unpublished manuscript. Lamon presented Lincoln's account of the dream, he wrote, "as nearly in his own words as I can, from notes which I made immediately after its recital."

Lincoln admitted that he did not believe in dreams

In this account, Lincoln began by commenting on the abundance of dreams in the Bible and asserting, "If we believe the Bible, we must accept the fact that in the old days God and His angels came to men in their sleep and made themselves known in dreams." In answer to a question put to him by his wife, Lincoln admitted that he did not believe in dreams, but he went on nevertheless to allude to a recent dream that "has haunted me ever since." Prodded by Mrs. Lincoln to continue, the president related that "about ten days ago" he had gone to bed late after he had stayed up "waiting for important dispatches from the front." As he began to dream, he experienced "a death-like stillness about me." Hearing the sounds of subdued sobs, Lincoln walked downstairs in search of the "mournful sounds of distress," but encountered no living person until he entered the East Room, where he found "a sickening surprise": a covered corpse resting on a catafalque, surrounded by soldiers, with mourners gazing at the body and weeping. "'Who is dead in the White House?' I demanded of one of the soldiers," Lincoln related in Lamon's account, continuing, "'The President,' was his answer; 'he was killed by an assassin!'" Lincoln then stated that he awoke soon after in response to a "loud burst of grief from the crowd," did not sleep again that night due to the dream, and "have been strangely annoyed by it since." Lamon further related that at a later encounter Lincoln insisted to him that he was not the corpse on the catafalque, a claim that has prompted political scientist Dwight G. Anderson to speculate that the dead president in the dream, in fact, was George Washington and that Washington's assassin was Lincoln himself. Washington, in Anderson's view, "provided Lincoln with an imaginary father whom he both emulated and defied," while Lincoln's haunting guilt "provided the psychological basis for Lincoln's refoundation of political authority in the United States."

Lincoln nevertheless alluded to a recent dream that "has haunted me ever since."

Yet historians Don E. Fehrenbacher and Virginia Fehrenbacher have cited internal inconsistencies and external evidence regarding Lamon's account that lead them to question its veracity. Lamon stated that the incident had occurred only a few days prior to the assassination, yet within Lincoln's monologue he related at one point that the dream occurred "the other night" and also "about ten days ago." The Fehrenbachers pointed out that although Lincoln stated in the account that on the night of the dream he "had been up waiting for important dispatches from the front," during the period of March 24 to April 9, he in fact had been at the front, rather than in the White House. In addition, there was no contemporaneous account of the dream following the assassination. No one mentioned it in the voluminous writings of the period, not Mary Lincoln, Lamon, anyone else at the supposed telling of the dream, or anyone to whom those who heard it may have relayed it. Despite these seeming inconsistencies, the Fehrenbachers note that Lamon's account of the dream has been quoted as fact by a number of respected authors.