Voting Rights and the 14th Amendment 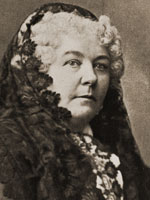 How much impact did woman suffragists have on the 14th Amendment? How was it that its provisions did not give women the right to vote? What did the 15th Amendment add that wasn't in the 14th?

History is messy. And so are politics. A good historian resists the urge to reduce the many causes or meanings of an event to a single one. One of the most persistent urges of students of American history is to try to decide whether the Civil War was "really" about slavery or about states' rights. Another contender for the "real" cause of the war has been the regional tensions between an agrarian and an industrial economy, and another contender, the unequal unfolding in various segments of society of the universal implications of the Enlightenment's principle of individual freedom.


History is messy. And so are politics.

The "real" cause was all of these and more. Those on each side of the conflict acted with a variety of goals, and individuals were commonly motivated by more than one reason.

The complexity of interests, goals, and motivations continued throughout the Reconstruction period after the war. The radical Republicans, who dominated Congress, were determined to complete the task of eliminating slavery. But this meant more than simply abolishing slavery itself, which occurred through the adoption of the 13th Amendment at the end of 1865. (The 13th Amendment wrote the abolition of slavery into the deepest level of American law, making it permanent. Northern abolitionists had worried that the Emancipation Proclamation of 1863 would be attacked after the end of the war as merely a temporary emergency measure.)

The passage of the 13th Amendment did not end the problem, however, because the freed slaves' legal status was undefined and unclear. From the freed slaves' point of view, this left them without legal protection against attempts in the South to coerce them into a permanent underclass status.

The problem was constitutionally complicated because the pre-war Supreme Court Dred Scott decision had declared black slaves to be non-persons. A 14th Amendment was necessary, therefore, to explicitly establish the status of blacks as persons and citizens through a natural right, inhering simply in having been born in the country and in recognizing their allegiance to it.

This was a philosophical expansion of who was included in the "We the People" phrase in the preamble to the Constitution, but the plight of the still-disenfranchised freed slaves in the South increased the urgency of passing the Amendment. Because the southern states were still occupied federal territory, the freed slaves—for the time being—could be given direct federal protection. However, the states were agitating for readmission to the Union, and their legislative representation had to be calculated. The Constitution had calculated it by counting slaves as three-fifths of a person. That language obviously now had to be amended. In addition, it was urgent that blacks be given full legislative representation to thwart Southern efforts to turn them into a permanent underclass without the full rights of citizens.

Problematic Language in the 14th Amendment

For the advocates of women's rights, this is where it got messy, and where some of the various motivations and goals of those who had previously been working together began to unravel. The radical Republicans who drafted the language of the 14th Amendment realized that by making a "natural rights" case for including blacks as full citizens, with all the rights and obligations, they would be making the same case for women. Had the amendment contained only the language of Section 1, women's rights advocates would have been thrilled because it would have strengthened their argument for female suffrage, even though it had to do with establishing citizenship rather than the right to vote per se:

But this wording would have made the amendment impossible to pass. There was wide political support for protecting the freed slaves, but not for giving women the right to vote.

This political dilemma was "solved" through the language of Section 2, which was needed to specify how the inhabitants of states would be counted for the purpose of legislative representation. It amended the Constitution's "three-fifths" clause.


There was wide political support for protecting the freed slaves, but not for giving women the right to vote.

And a penalty would be exacted from a recalcitrant state for any effort to deny blacks their votes. For each black denied the vote, the state's basis for representation would be reduced by one:

"Section 2. Representatives shall be apportioned among the several States according to their respective numbers, counting the whole number of persons in each State, excluding Indians not taxed. But when the right to vote… is denied to any of the male inhabitants of such State, being twenty-one years of age, and citizens of the United States … the basis of representation therein shall be reduced in the proportion which the number of such male citizens shall bear to the whole number of male citizens twenty-one years of age in such State."

Before the war, a slave state was able to count each slave as three-fifths of a person for the purposes of its apportion representation in Congress. Now, for each black who was denied the vote, the state would be forced to deduct a whole person from its basis for apportioned representation. This would apply strong pressure on the state not to disenfranchise blacks. Simultaneously, however, the language of this section of the amendment, in precisely specifying the calculation to be used, qualified the words "inhabitants" and "citizens" with the word "male."

This section, therefore, both enraged women's rights advocates while also allowing the amendment's proponents enough cover to find the votes for passage because it appeared to limit its effects to expanding the male population eligible to vote. The words "male" and "female" had not appeared in the Constitution before this. And women had been making their strongest Constitutional argument for the right to vote based on the "natural rights" reasoning upon which the Constitution relied. They argued that women already had the right to vote (and had always had it), at least implicitly, in the Constitution, but that mere outmoded convention had prevented that right from being recognized. They had been arguing for woman suffrage, in other words, based on the universal human rights they saw as affirmed by implication in the Constitution.

Most of those who had argued for women's rights before and during the war had also allied themselves strongly with the movement to abolish slavery, linking the two causes on the basis of natural rights. But now, by the insertion of the word "male" into the amendment, the Constitution would no longer be technically gender-blind, but would actively "disfranchise" women. Women's rights advocates were particularly stung by the fact that the amendment was written and was being pushed by the very same reformers, such as Senator Charles Sumner, with whom they had stood shoulder to shoulder in the agitation against slavery.


by the insertion of the word "male" into the amendment, the Constitution would no longer be technically gender-blind

As Elizabeth Cady Stanton remarked on the Republican Congress's determination to extend voting rights to blacks: "to demand his enfranchisement on the broad principle of natural rights, was hedged about with difficulties, as the logical result of such action must be the enfranchisement of all ostracized classes; not only the white women of the entire country, but the slave women of the South … the only way they could open the constitutional door just wide enough to let the black man pass in, was to introduce the word 'male' into the national Constitution."

Wendell Phillips, in 1865, as the new head of the American Anti-Slavery Society, turned the society's sights on ensuring black Americans' civil and political rights, especially suffrage. The old-line anti-slavery agitators understood that trying to extend suffrage to African-Americans would require a huge political battle. Trying to extend suffrage to women, too, at the same time, would be impossible. So now he told the society's annual convention, "I hope in time to be as bold as [British reformer John] Stuart Mill and add to that last clause 'sex'!! But this hour belongs to the negro. As Abraham Lincoln said, 'One War at a time'; so I say, One question at a time. This hour belongs to the negro." Elizabeth Cady Stanton and Susan B. Anthony both understood immediately that this meant that their erstwhile supporters among the abolitionists—many of whom were now in the councils of legislative influence in the Republican Party—were putting the "woman's cause … in deep water."

Congress proposed the 14th Amendment on June 13, 1866. It was ratified and became law on July 9, 1868. Its adoption caused a deep rift among those who, until then, had made common cause. Many of the supporters of the amendment hoped that the issues of black suffrage and woman suffrage could be separated out and treated sequentially, one after the other. And many of them were acting on the pressing need to deal with the issue of black citizenship and suffrage separate from the issue of woman suffrage out of the necessity to cope with the unfolding events in the aftermath of the war.


"This hour belongs to the negro."

Nevertheless, many women's rights activists felt that their cause had been betrayed by their former friends in reform, and that the cause of blacks and women had not just been separated, out of a temporary necessity, but that the cause of women had been set back. Historian Ellen DuBois has noted that this was a watershed event in that women's rights activists, after this, began focusing their organizing efforts specifically on gaining for women the right to vote, rather than relying on broader reforms. They organized both the National Woman's Suffrage Association and the American Woman Suffrage Association in 1869, and began petitioning for a constitutional amendment that would guarantee women the right to vote.

As events unfolded in the South, blacks were often excluded from voting by local restrictions of one kind or another, and Congress recognized that constitutionally defining blacks as citizens, through the 14th Amendment, did not absolutely guarantee their right to vote. Consequently, Congress proposed the 15th Amendment on February 26, 1869. It was ratified and became law on February 3, 1870:

For women's rights advocates, this amendment added nothing new to their struggle for suffrage. Especially frustrating for them was the fact that antebellum reformers had often railed against legal limits to freedom based on "race, color, or sex," and the language of this new amendment seemed to them to be a kind of parody of that, in which "sex" was deliberately replaced by "previous condition of servitude," that is, slavery.

It was a painful irony for many women's rights activists, therefore, that they found themselves actively opposing the passage of the amendment (as some of them had opposed the 14th Amendment). The amendment that would guarantee them the right to vote—the 19th—would not become law until 1920.

"Petition of E. Cady Stanton, Susan B. Anthony, Lucy Stone, and others asking for an amendment of the Constitution that shall prohibit the several States from disfranchising any of their citizens on the ground of sex, ca. 1865," Records of the U.S. House of Representatives, National Archives and Records Administration, Washington, DC. ARC Identifier 306684.