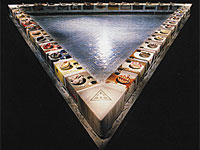 What kind of visual art was there during the time of the feminist movement?

I will suppose that by "the time of the feminist movement," you mean essentially during the 1960s–1980s, even though feminism of one kind or another has made itself felt in the arts for at least a century–in the choreographic innovations of dancer Isadora Duncan, for example–and continues through today. Feminist art was the subject of WACK! Art and the Feminist Revolution, an exhibit that originated at the Museum of Contemporary Art in Los Angeles in 2007 and traveled around the country, including to the National Museum of Women in the Arts (NMWA) in Washington, DC. The exhibit featured 300 works of painting, sculpture, photography, film, video, and performance art from 1965–1980 created by 118 well-known artists, including Judy Chicago, Yoko Ono, Carolee Schneemann, and Cindy Sherman. Feminist art was a "philosophy of art informed by gender," according to Susan Fisher Sterling, the curator of the exhibit at the NMWA. The artists "were throwing off many of the sanitized conceptions of women and expressing overt independence and sexuality in a way that had never been acceptable before." As a gesture toward that, the exhibit curators placed warnings in some portions of the exhibition, advising museum visitors of "potentially disturbing subject matter."

Feminist art was a "philosophy of art informed by gender..."

Curators described the exhibit as, "An edgy account filled with history, passion and scandal, Wack! … addressed such issues as male biases, body image, sexuality and media interpretation of feminism from the perspective of many traditional and controversial artists over several decades." One prominent axiom of feminist art was the notion that the body—especially the female body—was a kind of blank stage or canvas upon which "narratives" or images of various selves were arbitrarily "mapped" or described, often through violence. Like most Modern (and then Postmodern) art of the period, feminist art was immersed in political revolution, in gender, race, and class. The political and cultural agenda of feminist artists was to take control of their destinies and redefine their social roles by a combined assault on—or inversion of—the "patriarchal structures" of culture and politics.

Like most Modern (and then Postmodern) art of the period, feminist art was immersed in political revolution...

Also like most art of the period, feminist art tended to be explicitly self-referential, making the artists the subjects of the works they created, "declarations of self," as performance artist Cheri Gaulke put it. Photographer Cindy Sherman's self-portraits in different personae are examples of this, as are the performance art film events created by Carolee Schneemann, such as her Autobiographical Trilogy, which featured sexually explicit films of herself, or, as evidence that themes of feminist art have continued, Eve Ensler's 1996 play, The Vagina Monologues, or Yale art student Aliza Shvarts' 2008 "creative fiction" about self-inseminations and abortions. Typical of feminist art was a related emphasis on a supposed "woman’s way" of working—meaning, in particular, the forming of collectives or cells of women artists who sought to produce art jointly, and as part of a process of "consciousness raising" among the members of the collectives.

Yet another way to "rescue" women was to honor typically feminine arts and crafts...

Another goal of feminist art was to "rescue" women of a previous day—notably, women artists who had not garnered the critical acclaim they had deserved because they were women, or because the subjects of their art were derived from the domestic realm, such as child-rearing or food preparation, or because the works evinced a particularly "feminine" sensibility. Yet another way to "rescue" women was to honor typically feminine arts and crafts, including, particularly, sewing, weaving, costuming, embroidery, and quilting, and place these in the forefront of the artistic endeavor, rather than in the "lesser" margins, as they had been traditionally. Judy Chicago's 1974 installation piece, The Dinner Party, was influential in stimulating many of these issues within feminist art.