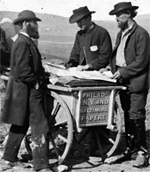 More than 1,000 photographs depict Civil War military personnel, preparations for battle, and the aftermath of battles in the main eastern theater and in the west in this collection. Photographs also include Federal Navy and Atlantic seaborne expeditions against the Confederacy, Confederate and Union officers and enlisted soldiers, and Washington, DC during the war. Most images were created under the supervision of photographer Mathew B. Brady. Additional photographs were taken by Alexander Gardner after leaving Brady's employment to start his own business.

The presentation "Timeline of the Civil War" places images in historical context. "Does the Camera Ever Lie" demonstrates the constructed nature of images, showing that photographers sometimes rearranged elements of their images to achieve a particular effect. This website is useful for studying 19th-century American photography and Civil War history.