180 documents and artifacts interpret 19th-century westward exploration and the concept of Manifest Destiny.

Rivers, Edens, Empires: Lewis and Clark and the Revealing of America

Rivers, Edens, Empires: Lewis and Clark and the Revealing of America 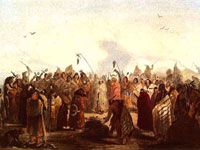 Thomas Jefferson outlined three motivating factors in his instructions to Lewis and Clark: a search for navigable rivers to span the continent; a quest for Edenic beauty and riches; and the competitive desire to acquire a continental empire. These 180 documents and artifacts interpret 19th-century westward exploration from this perspective. The range of materials is striking. In addition to maps, plans, and charts, the site offers images (sketches, watercolors, etchings, and engravings), texts (letters, diaries, speeches, newspapers, and books), and tools (surveying and medical instruments, cooking utensils, armaments). The exhibit opens with an examination of the "imperial mentality" common to Virginia's aristocratic class in the late 18th century and then focuses on the Lewis and Clark journey. It ends with the subsequent expeditions of Zebulon Pike, Stephen H. Long, Charles Wilkes, John Charles Fremont, and the mid-19th century transcontinental railroad plan that supplanted the search for a water route.