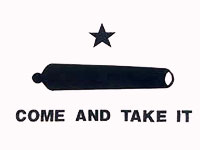 How did the Alamo happen?

When Americans started to move westward after the Louisiana Purchase in 1803, many found the Mexican government happy to have them in Texas (they were called "Texians" there), alongside the Tejanos (Texans of Mexican or Latin-American descent). Because settlements were few and far between, the Mexican government needed settlers to protect the area from the Apaches and the Comanches, and the central government, centered far to the south in Mexico City, therefore encouraged the formation of regional militias.

Mexico achieved independence from Spain in 1821, and the Mexican Constitution of 1824 established the newly independent country as a Federal Republic. In 1833, after years of political volatility and coups, however, Mexico emerged as a centralized dictatorship under the control of General and President Antonio López de Santa Anna. As a result, several Mexican states rebelled against the reversal of federalism, including Coahuila y Tejas (the area that would become Texas), and formed their own regional governments. At a convention called in 1833 by dissidents to the central government, Stephen F. Austin was chosen as the representative of the self-declared "new" state of "Texas."

By this time, Anglo settlers in Texas outnumbered Tejanos by more than 5 to 1. Mexico was convinced that the United States coveted Texas. In 1827, President John Quincy Adams had offered to buy the region for a million dollars, and in 1829, President Andrew Jackson had increased the offer to $5 million. Mexico had rejected both offers.

At the same time, the Tejanos felt betrayed by Santa Anna's consolidation of political power. They had long felt alienated by the government in Mexico City and by the circles of power further south.

By mid-1835, "Texas Committees" in the U.S. sent money to Texas and recruited volunteers to help Texians resist the central government. Not long afterwards, Stephen Austin called for Texan independence.

Mexican soldiers assaulted the Texian garrison at Gonzales with the goal of forcing the settlers there to return a cannon they were given for self-defense. The Texians raised a flag picturing the outline of a cannon and the words "Come and Get It." The Mexicans were forced to retreat.

In November, at San Felipe de Austin, Texans formed a provisional government, the "Consultation," that expressed allegiance to the annulled Mexican Constitution of 1824. The Consultation authorized the creation of a new Texas regular army force (apart from the volunteers who were by then headed by Stephen Austin) commanded by Sam Houston.

The Scene is Set at the Alamo

In December 1835, Jim Bowie and his volunteer troops defeated the forces of Santa Anna's brother-in-law, General Martin Perfect de Cos, after a siege of the Alamo Mission at Béxar (modern San Antonio, Texas). The Texians released De Cos and his 1,000 men and paroled them. Afterwards, the Texians encamped at the Alamo and fortified it, although a confused chain of command among the various Texan military commanders shortly stripped the Alamo of most of its provisions and all but 100 or so defenders.

General Santa Anna left Mexico City at the end of November 1835, with a force of 6,000 soldiers to put down the revolt in Texas. Shortly thereafter, the Mexican Congress, encouraged by Santa Anna, declared that all "foreigners" captured fighting against the government should be regarded as "pirates" and summarily executed. By February 23, Santa Anna reached San Antonio and occupied the town, beginning a siege of the Alamo, then under the joint command of Jim Bowie and William B. Travis. Davy Crockett was among the Anglo defenders.

Meanwhile, Texans met 175 miles to the east, at Washington-on-the-Brazos, and on March 2 signed a Declaration of Independence from Mexico, declaring a new Republic of Texas. On March 4, Sam Houston was appointed commander of Texas forces, and he set out to raise and train an army in east Texas, in advance of Santa Anna's route.

The Alamo's defenders, still no more than about 200 men (but including a band of 25 Tejanos led by Juan Seguín) were determined to block Santa Anna from proceeding to east Texas to confront Houston and his men while they were building in strength. They pledged to defend the Alamo to the death.

Santa Anna occupied San Antonio and, with 1,500 soldiers, laid siege to the Alamo, trading intermittent cannon fire for about a week. The defenders refused to surrender. Santa Anna's forces overran them on March 6, 1836, in an early morning attack, under orders not to take prisoners. The defenders gradually fell back and collected around the chapel, where non-combatants (women, children, and slaves) were gathered.

The Mexicans reached the chapel and captured it. They released the non-combatants, but all defenders (including 8 Tejanos) died, either in the battle or, according to some accounts, by execution after surrender.

On March 19, 1836, 90 miles to the southeast, at the Battle of Coleto, forces under General José de Urrea defeated the Texian garrison stationed nearby at the Presidio La Bahia at Goliad. Eight days later, the Mexicans massacred the Texan garrison of more than 350 they had taken as prisoner, including its commander, James Fannin.

Santa Anna was branded throughout Texas as bloodthirsty, and as a result, Houston's forces grew with outraged volunteers. Sam Houston and his newly formed army proceeded into east Texas, closely pursued by Santa Anna, whose divided forces clashed several times with Texans.

At San Jacinto, 250 miles east of the Alamo, the Texan forces turned on Santa Anna's overconfident army in a surprise attack during siesta time. The Mexican army was defeated in 20 minutes. Seven Texans were wounded and up to 300 Mexicans died.

In the confusion, Santa Anna attempted to escape by donning the uniform of a corporal and hiding in a marsh, but the Texans noticed that the "corporal" was wearing silk underwear and figured out his identity. Under a tree nearby, Houston and Santa Anna negotiated a treaty giving Texas its independence and Santa Anna was released.

The Alamo has an extensive website that includes a good reading list on the battle at the Alamo and the Texas Revolution.

The Texas State Library and Archives Commission's website has a number of primary documents from the events surrounding the Alamo battle.