RFK in the Land of Apartheid: A Ripple of Hope

RFK in the Land of Apartheid: A Ripple of Hope 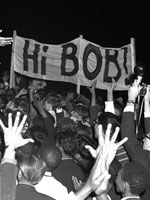 Senator Robert F. Kennedy's trip to South Africa in June 1966 to protest that country's system of apartheid and support efforts to combat it is amply documented on this site with texts, audio files, film clips, and photographs. The site provides texts of the five speeches delivered by Kennedy during the visit—for three of these, full audio files are provided. Also offers texts of 13 additional speeches—from South African students and political leaders, as well as American leaders—with six available in audio format. Background annotations of up to 100 words accompany all texts. A newspapers section on the press coverage of the visit provides nine articles from U.S. newspapers and 15 articles from South African newspapers. A magazines section provides seven articles about the visit, including a Look magazine article about the trip written by the senator; and a cartoon section highlights 12 political cartoons. The site also provides 13 related documents, and more sources can be found in the "Resources" section. These include the "Black Christ" painting that caused uproar in 1962, 11 posters of Nelson Mendela, 11 annotated political cartoons, two national anthems for comparison, and 19 recommended books and links to 19 relevant sites.

An overview essay of 3,500 words describes the "enormous impact" of Kennedy's visit and illuminates "the manner in which he subtly challenged and undermined some of the pillars of apartheid ideology and mythology." A study materials section is designed for use in high schools and colleges with questions for class discussion and a feedback questionnaire. Additionally, the site's audio and video streaming now works with Realplayer and Mediaplayer, and the video streaming also now works with with Quicktime. A valuable site for studying the history of race relations in South Africa and the United States.