The Great Depression and Today 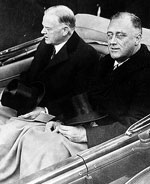 The anniversary of the October stock market crash of 1929 approaches, and many are comparing the current financial crisis to the beginning of the Great Depression. Here are some classroom resources for teaching about economic issues and commentary by historians on similarities and differences between 1929 and now.

Annenberg Media's Learner.org offers teacher resources to guide classroom discussion. Economics U$A looks at critical issues in U.S. economics, with programs including The Banking System, The Federal Reserve, Stabilization Policy, Exchange Rates. The program "Reducing Poverty" looks at policies enacted under FDR during The Great Depression. Inside the Global Economics looks at vivid examples around the world, from hyperinflation in Argentina to petrodollar recycling in the 1970s to "shock therapy" in Poland.

The Economics Classroom: A Workshop for Grade 9-12 Teachers includes programs relevant to the current crisis such as The Government's Hand and The Building Blocks of Macroeconomics.

In The Real Great Depression published in the Chronicle of Higher Education, 19th-century historian Scott Reynolds Nelson explains why the global Depression of 1873 offers a better historic parallel for the current financial crisis than does the crash of 1929.

Rutgers Professor James Livingston writes in The Great Depression and Ours: Part I at the History News Network that the present economic crisis and the Great Depression are comparable "not because they resulted from similar macroeconomic causes but because the severity of the credit freeze in both moments is equally great, and the scope of the financial solution must, then, be equally far-reaching." He discusses causal factors of both.

On The New York Times Video Reports an economic reporter and the Chief Financial Correspondent talk about the roots of the crisis and compare it to the Great Depression. Their conversation, Echoes of a Dismal Past explores whether the government has learned the lessons of the 1930s. Financial Crisis Hits Teens goes to Elisabeth Irwin High School in downtown Manhattan to see how the nation's financial crisis is trickling down to teenagers. The three-and-half minute video offers a good starting point for economics, history, and social studies classroom discussion.