A New Look at Abraham Lincoln 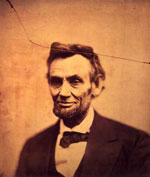 The new media of the times has always affected how presidents (and others) reach out to the public.

Internet communication played an important role in the 2008 presidential campaign. If candidates didn't start their run for the office with a strong web presence, the success of president-elect Barack Obama's online outreach led other contenders to re-examine its usefulness. Current statistics from an October 31 Pew Research Center article compare the internet as a major source of campaign news with other media.

Hardly a week in office in 1933, President Franklin Roosevelt created radio fireside chats which continued through 1945 to reassure the public during the Depression and to explain his hopes and plans for the nation. (Audio files of these chats are widely available on the internet, including The Internet Archive, and the National Endowment for the Humanities Edsitement offers the lesson plan, FDR's Fireside Chats: The Power of Words).

In 1960, the first televised debate between presidential candidates Senator John Kennedy and Republican Vice President Richard Nixon initiated the influence of television in election campaigns. Historian Liette Gidlow explains that "part of the reason that John F. Kennedy captured the presidency was the way he performed in a series of televised debates against his Republican opponent, Richard M. Nixon." (The Great Debate: Kennedy, Nixon, and Television in the 1960 Race for the Presidency in History Now, Gilder Lehrman Institute) Clips from the debate appear on YouTube, including "JFK vs. Nixon: The 1960 debates."

And in the 19th century, President Abraham Lincoln turned to the developing field of photography to broaden his public presence.

A new exhibit, One Life: The Mask of Lincoln, at the National Portrait Gallery in Washington, DC, and the companion online exhibit show the role of media—in this case, presidential photography and portraiture—200 years ago.

Many of the images are familiar; Lincoln realized that photographs were a way of maintaining a public presence, and the exhibit demonstrates how media technology of the 19th century began to enable this process. As the caption accompanying the 1861 Alexander Gardner photograph states, "Although Lincoln knew, and joked about, the fact that he was a difficult subject, he was not camera-shy, producing a continuous portrait record of his time in office. Attuned to public opinion, Lincoln used portraits to keep himself in the eye of his fellow citizens." The exhibit leads to analysis of how he did this and what the images reveal.

Covering more than presidential campaigns, the 31 images of Lincoln, 18571865, in the gallery exhibit are reproduced in the web exhibit as well as additional photographs of Lincoln's contemporaries. Accompanying text and excerpts from Lincoln's speeches and writings caption the images, including Matthew Brady and Alexander Gardner photographs.

Six downloadable mp3 files from prominent scholars discuss the portraits, their artistic presentation, and the events they commemorate. The audio files are also available via cell phone for visitors to the exhibition.

A helpful review of the exhibit appeared in the Washington Post on November 8, 2008. The exhibit is on view at the National Portrait Gallery through July 5, 2009.

(This news item is a continuing series on materials related to the celebration of the 200th anniversary of Lincoln's birth. See this news item for other resources.)