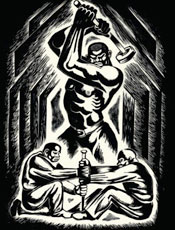 School's out (well, more or less—excluding professional development, workshops and conferences, and planning for next year), and more leisure time for reading may be in. Here is the first in a series of suggestions from staff at the National History Education Clearinghouse for your summertime "must read" booklist!

In 1931, nine African American boys rode with hobos on a train from Chattanooga to Memphis and along the way, two white women—fearful of arrest for prostitution—claimed the Scottsboro boys raped them. Local juries found them guilty, even after the U.S. Supreme Court twice struck down the verdict and one of the two women changed her story. Kelly Schrum, Clearinghouse Co-Director and Director of Educational Projects for the Center for History and New Media, recommends James Goodman's account of the narrative of the Scottsboro boys, Stories of Scottsboro. "It's an engaging read. Goodwin is a storyteller, and he weaves together multiple perspectives and threads—often conflicting and competing—to demonstrate how we make sense of experiences." Stories from Scottsboro explores layers of meaning through the perspectives of plaintiffs and defendants, lawyers, judges, journalists, NAACP workers, and the Communist-backed International Labor Defense and links those points of view to the larger historical framework of the 1930s.

Theology and place influences how people think about race and identity.

Sharon Leon, Clearinghouse Co-Director and Director of Public Projects for the Center for History and New Media, recommends Parish Boundaries: The Catholic Encounter with Race in the Twentieth-Century Urban North by John T. McGreevy. According to Leon, "This book does a good job of paying attention to the role of place and theology in thinking about identity and race." Parish Boundaries explores the meaning of neighborhood to urban Catholics, a meaning in which geography, church, and school became inseparable. McGreevy explores how this sense of neighborhood influenced local Catholic resistance to integration—even when the Catholic church itself espoused racial equality.

The Ballad of John Henry is perhaps the most recorded song in America—the story of the iconic railroad man who became a mythical embodiment of the heroism of the American worker. Lee Ann Ghajar, Clearinghouse Project Manager, likes Steel Drivin' Man: John Henry, the Untold Story of an American Legend because it is as much a book about how to do history as it is an historical narrative. The reader travels with historian Scott Reynolds Nelson and his dog in his wife's Ford Escort in pursuit of the real John Henry—a man more likely a mistreated, rather short, convict-laborer than the gigantic hero of folk songs who died with a hammer in his hand after a mighty race against a steam drill. "You follow the historian as he follows John Henry from the early days of his research when an historic map saved Scott Reynolds Nelson from a speeding ticket into archives, libraries, census documents, and company reports. It's a great story," Ghajar explains.

Is there a relationship between early American consumerism and today?

Teresa DeFlitch, Clearinghouse Project Manager, appreciates The Refinement of America: Persons, Houses, Cities by Richard Bushman. Bushman looks at the material culture of everyday life—houses and their rooms, clothing, conversation, books, manners, entertainment and posture, for example—and discusses how changes over time illustrated changing values and the development of the American middle class. DeFlitch says The Refinement of America "vividly demonstrates the importance of material culture and landscape in history and how we use things to create identity." Bushman uses different kinds of evidence, from teacups to churches to etiquette books, to demonstrate how the refining process affected the way Americans interacted with each other. "Students can relate to the agency of consumers, even if they are from long gone centuries, and there is plenty of opportunity to use the book as a framework for teaching behavioral differences between then and now," DeFlitch concludes.

Teaching the Emancipation Proclamation on Constitution Day
The Great Depression and Today
Conference-going for the Educational Professional
Valerie Tripp on the Power of Everyday Objects in Teaching History
Visiting History: A Guide for Professional Development
Resources for Earth Day