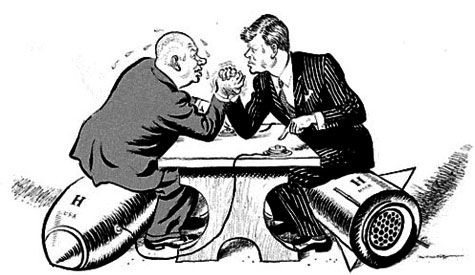 The 47th anniversary of the Cuban missile crisis passed with little public notice this year—except for an occasional reference to the U.S.-Iranian nuclear dispute as "the Cuban Missile crisis in slow motion."

Nonetheless, "No event during the Cold War has generated more popular and scholarly attention . . . it has become perhaps the most studied international confrontation of the twentieth century, " according to the editors of the Cuban Missile Crisis 1962 Documents Reader. And no wonder. In October 1962, The United States looked down "the gun barrel of nuclear war," according to Kennedy speechwriter Theodore Sorenson.

In the aftermath of the Cold War, the declassification of top secret records introduced new interpretations.

Since 1987, scholars and archivists have used the Freedom of Information Act (FOIA), to obtain, consolidate, and archive documents across the spectrum of Federal agencies about the Cuban missile crisis, events that led up to it, and its aftermath.

Newly declassified records gave new perspectives to four critical areas of analysis: 1) Why the Soviet Union placed missiles in Cuba; 2) why the United States responded as it did; 3) the leadership role of John F. Kennedy during the crisis; and 4) the consequences of the near-miss of nuclear weapons deployment. Newly available records also let historians study the Cuban missile crisis from the point of view of the Soviet Union and Cuba as well as the United States.

Teaching About the Cuban Missile Crisis

The issues are so complex and the ramifications so profound, getting a grasp on the critical points of the Cuban missile crisis focus on diplomatic history, on understanding the situation from the top down. The following resources filter only a few among the many available materials to provide an overview of the issues and main actors.

This simple interactive site from the National Endowment for the Humanities summarizes the situation from the point of view of the Presidential cabinet. It poses the question, "Mr. President, you've been briefed about the presence of medium-range missiles in Cuba." Visitors examine the choices Kennedy and his advisors faced and get a brief analysis of the consequences of each, the opinions of key members of President Kennedy's advisory committee, and an introduction to primary sources—particularly the National Intelligence Estimate, a key briefing document for the advisory committee. It's a helpful site for summarizing the complexities from the viewpoint of the Cabinet.

The Cuban Missile Crisis 1962 Documents Reader, from the National Security Archive at George Washington University, is extraordinary in the depth and breadth of materials and narrative. It is a research site for teachers and advanced students. Resources include primary source materials, a detailed timeline, and documents and audio files, from both the United States and the Soviet Union charting causes and events of the Crisis.

Equally important, the Documents Reader explains how our understanding of the event continues to change as more documents are declassified or retrieved from a spectrum of agencies who were major players in the flow of information and decision-making in process in 1962. Analytical essays from historians sift through the historiography and recent evidence, discussing how this new evidence has rearranged assumptions and conclusions about the missile crisis. ". . . [M]isinformation, miscalculation, and misjudgment" characterized the decision-making process in Washington, Moscow and Havana," according to then-Secretary of Defense Robert McNamara.

American accounts always left Cuba out of the story; and the film Thirteen Days ignores the Soviet Union as well.

Both the Documents Reader and the U.S. State Department suggest using the blockbuster film Thirteen Days as an analytic tool for students. At the Documents Reader, the essay Turning History on Its Head explains why the film misrepresents actual causes, events, and outcomes of the crisis—a crisis clearly neither begun nor finished during these 13 October days. (In fact, the Soviet Union and the United States continued to negotiate on missile removal and ending the blockade until reaching agreement on November 20.)

The U.S. State Department offers an activity idea, suggesting watching Thirteen Days and comparing the story told by historic documents with the version relayed by Hollywood using the Motion Picture Analysis Worksheet from the National Archives. The U.S. Department of State website for youth also includes a number primary sources on the Cuban missile crisis that can spark classroom discussion.

Featured website reviews lead you to NSA and the Cuban Missile Crisis, a resource for 100 declassified documents related to Soviet and American involvement in Cuba.

Explore using Wordle to help your students wend their ways through some of the more complex vocabulary, documents, and issues of the Cuban missile crisis.

Download a quiz from the Clearinghouse archive—Textbook Twisters: Cuban Missile Crisis—and see if you can tell which which country wrote which account of the event in their school textbooks.