236 Years Since the Boston Tea Party 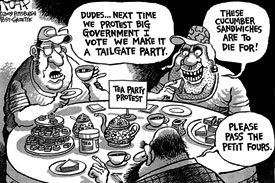 On December 16, 1773, according to the Boston-Gazette and Country Journal, "A number of brave & resolute men, determined to do all in their power to save their country from the ruin which their enemies had plotted, in less than four hours, emptied every chest of tea on board [three British ships] without damage done to the ships or any other property...and the people are almost universally congratulating each other on this happy event."

Many consider the Boston Tea Party the night the Revolution began. Governor Thomas Hutchinson calculated the action as "the boldest stroke that had yet been struck in America. Open general revolt must be the consequence." John Adams extolled the Tea Party as "the most magnificent movement of all."

The Tea Party was a small event itself, but the significance and impact were large.

The night was not without repercussions. Within months Parliament enacted the Coercive Acts (also known as the Intolerable Acts), reduced colonial self-government in Massachusetts and sparked greater resistance throughout the colonies.

Teaching about the Boston Tea Party

These lesson plans—among the thousands of hits resulting from a simple search— help educators emphasize historical thinking skills and to contextualize the events of December 16, 1773.

The Boston Tea Party: Costume Optional? for grades 6-8 is organized around the guiding question, "What really happened at the Boston Tea Party? How can we "know" what happened at an historical event of the distant past?" Edsitement activities ask students to analyze different primary source accounts to reconstruct the event. Edsitement includes an extensive list of related resources as well as suggestions for expanding the lesson, including discussion about street theater protest, linking the tea party to protest movements of the 1960s.

At the Massachusetts Historical Society, the multi-layered website, The Coming of the American Revolution analyzes fifteen topics, including The Boston Tea Party. A contextual essay introduces each topic within the framework of nine core concepts. Significant documents and additional primary materials support the essay. Lessons designed by classroom teachers and utilize the documents to teach the core concepts. Conflict and Compromise, for example, is built around a DBQ utilizing five documents to explore the forces advocating both conflict and those advocating compromise at the time of the Boston Tea Party.

Not until 1835 did the event contemporaneously referred to as "The Destruction of The Tea" become the Boston Tea Party. Nonetheless, the term tea party has become symbolic for anti-government protest periodically since the 19th century.

This year, organizers mobilized dozens of Tax Day Tea Parties on April 15 across the nation and continuing throughout the year. Commentators exploring these protests against taxation, government spending, health-care reform, and a host of other issues create an explicit historic parallel between 1773 and today.

A blog entry of the online journal, Common-Place, links to diverse commentary and background materials on the 2009 events. Some stress that the the symbolic adaptation of the tea party analogy—tax-related though they may be. Yet another entry stresses the comparisons of fact.

The Tea Party appeals to traditionalists and self-proclaimed patriots...it also holds a special appeal for radicals and reformers.

The Tea Party in Politics: Why the Event in Boston Harbor Keeps on Appealing to Conservatives discusses how conservatives have appropriated the symbolism of the 1773 Tea Party since the 1830s. Not so, says The Tea Party's Appeal Across the Political Spectrum, pointing to American claims on the Tea Party from women suffragists, environmentalists, Abraham Lincoln and to global references from Sun Yat-Sen to Mahatma Gandhi.

Ask-a-Historian looks at the question, "The Boston Tea Party is well documented, but are there other instances of similar raids?" and traces how the spirit of resistance spread. Another reader asks, Why were the Sons of Liberty not stopped by British troops as they boarded three ships in Boston Harbor on Dec. 16, 1773?

Boston's Public Television Stations, WGBH, offers a series of lectures from the Old South Meeting House. Among them: Charles Bahne, writer, historian and tour guide tells the story of events before, during, and after the tea party using artifacts and historic sites to illustrate.

Sam Adams, Paul Revere and "The Body of the People" focuses on the Boston Tea Party to explore the role of the average person in events leading to the Revolution

Learn About Mexican American History
Especially for New Teachers
Teaching the Cuban Missile Crisis
Amy Trenkle's Columbus in the Capital
Bookmark This! Gilder Lehrman's History Now
A Day On, Not a Day Off