Clearinghouse Project Manager Lee Ann Ghajar writes the blog. She loves blogs as tools for getting information to people who need it in concise, usable form. Lee Ann is also working on her Ph.D in American history at George Mason—a far less concise project than blogging. 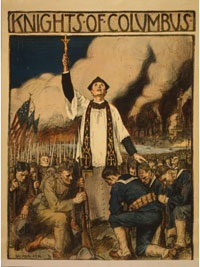 Contrary to what our grandparents—and perhaps parents—were taught, Christopher Columbus did not discover America in 1492. The land had been inhabited for centuries, and other explorers from Europe, Asia, and Africa had already landed here.

Neither were his voyages decisive straws breaking the back of the flat earth myth. Renaissance scholars inherited their surety about a rounded shape of the world from antiquity. Nineteenth-century author Washington Irving is responsible for ascribing that feat to Columbus in his 1828 publication, The Life and Voyages of Christopher Columbus, a fictional account represented as biographical.

So why is he one of only two individuals with his own national holiday in America? (Martin Luther King, Jr., of course, is the other). Why are cities, streets, and schools named after him, and why do memorials to him appear in every state in the country? Over the centuries, Italian Americans, Catholic and Protestant religious groups, American Indians, Hispanic Americans, government bodies, and more have seen Christopher Columbus as a symbol of unity and of opposition and of power. The umbrella of Columbus Day hosts this variety of political, religious, and ethnic groups who have mobilized to create celebrations and traditions that reinforce and legitimize their own perspectives and experiences.

All sides treat him as a symbol, so we can't avoid asking questions.
So, what DID Columbus do?

Broadly speaking, the narrative of Columbus is one of unintended consequences. Columbus set out to find a western route to Asia. Instead, the timing of his four voyages opened the New World to Europeans during an era of growing imperialism and trade expansion.

The Internet Medieval Sourcebook from Fordham University published extracts from the journal of Christopher Columbus in his voyage of 1492. Their preface to this wall-to-wall, unadorned transcription summarizes the tension of conflicting interpretations. "On the one hand, [Columbus's voyage] is witness to the tremendous vitality and verve of late medieval and early modern Europe—which was on the verge of acquiring a world hegemony. On the other hand, the direct result of this and later voyages was the virtual extermination, by ill-treatment and disease, of the vast majority of the Native inhabitants, and the enormous growth of the transatlantic slave trade. It might not be fair to lay the blame at Columbus' feet, but since all sides treat him as a symbol, such questions cannot be avoided."

Annenberg Media approaches Columbus under the heading History and Memory, pointing out "Until recently, Columbus was revered as an intrepid explorer and civilizer in many parts of the world, not least the United States." Annenberg's primary and secondary materials demonstrate that increased scientific and archaeological evidence propelled an historiographic change. "Increasingly, Columbus became symbolic of an encounter that raised uncomfortable questions about conquest, colonialism, and destruction of peoples and habitats."

The History Channel gives a biographical overview of the life of Columbus and a summary of the controversies about Columbus. Their brief history of the holiday, however, leaves out important milestones such as the American Indian Movement's opposition to the holiday and the observance of alternative holidays established through legislation in some states. (Why activists are challenging Columbus Day in Colorado at History News Network discusses a 2006 protest in Denver, where Columbus Day began.)

Edsitement provides a particularly comprehensive lesson plan to teach about Christopher Columbus. What Was Columbus Thinking encourages students to read and talk about primary and secondary sources to discern the intentions behind the voyages of Columbus and the consequences in the lives of Native Americans and Europeans. Although billed as lesson plans for third through fifth grade, the primary sources (including a letter from Columbus and excerpts from his journal) seem a bit advanced for that age group; however, the lesson plan offers detailed guidance for document analysis.

The New York Times lesson plan, scaffolded for intermediate and high school students, uses the vehicle of Columbus Day protests to research "exploration and colonization from the point of view of a stakeholder of that nation."

Books
Books for children and adults look at how we construct historical narratives and who writes them.

A wealth of historical fiction, biography, and other nonfiction books for all age groups can be found in almost any bookstore or online. These two books look at the constructions behind different narratives about Columbus Day and how they came to be.

And here at the Clearinghouse, please visit these materials:

Answers to American Myths: Christopher Columbus in our past quizzes section clarifies misconceptions about the man, his explorations, and the holiday.

The website review Columbus and the Age of Discovery leads to a cumbersome, but useful, website for searching and accessing background materials on the man and the era.

The website review 1492: An Ongoing Voyage introduces exhibit-based materials from the Library of Congress.

In the Research Brief Learning to Think Historically: Columbus, Exploration, and the Idea of the Flat Earth, educator Bob Bain models a lesson encouraging students to challenge and examine inherited beliefs about history through exploring historical evidence.