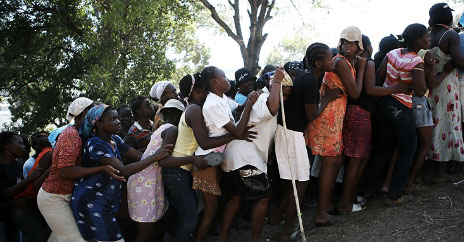 Any human disaster anywhere in the world jars our sensibilities, reminds us of our interconnectedness, and challenges our worldview.

The devastation in Haiti hits us intellectually, emotionally, and ethically, and we ask "how can I help?" A contagious call to action multiplies. But the immediacy of media coverage, continued stories and images of Haiti's people and places, the massive national and global response from individuals, celebrities, institutions and organizations still leave us grasping for a more complete sense of what's happened and why. Headlines spur a teaching moment in the history classroom.

Broadly speaking, teaching materials focus on two approaches: the history of Haiti and the history of natural disasters. Fewer resources are available for the former, but here are a few to jumpstart discussion.

American history textbooks are strangely silent on the subject of Haiti.

We find few answers to questions about the history of Haiti and the relationship of the United States to that country in American history textbooks. Yet, the only successful slave revolt in history took place there in the aftermath of the American and French Revolutions, culminating with Haiti's declaration of independence from France in 1803 and ideologically infused, in part, by the return of freedmen of color sent to fight in the American Revolution. Haiti was, in fact, hotly contested territory, an economic jewel sought by the British, Americans, French, and Spanish. American history textbooks, however, generally consign the Haitian Revolution to a couple of paragraphs, and the subsequent history of the country itself is subsumed under themes of foreign policy and America's extension into the global economic and political sphere.

The history of Haiti and America's relationship with that country raise critical issues of race and foreign policy.

These online resources help fill informational gaps on the history of Haiti and America's relationship to that country.

Starting with an encyclopedia is sometimes a good idea—as long as it isn't the endpoint, as the founder of Wikipedia is the first to say. And Wikipedia's History of Haiti entry is a comprehensive place to find an overview and directions for further inquiry.

To Heal Haiti, Look to History, Not Nature in the New York Times oped section (January 21, 2010) comprehensively highlights Haiti's history and America's relationship with that country. Author Mark Danner recently published Stripping Bare the Body: Politics, Violence, War which chronicles political conflict in Haiti, the Balkans, Iraq and the United States. "...there is nothing mystical in Haiti’s pain, no inescapable curse that haunts the land. From independence and before, Haiti’s harms have been caused by men, not demons," he writes.

At the History News Network (HNN), several entries by historians in Roundup: Talking About History are valuable. Scroll down the list of entries (or hit Control F and enter Haiti in your Find field) and look for America's Historic Debt to Haiti by Robert Parry and The Televangelist Misuse of Haiti's History by Juan Cole for analysis uniting past and present.

Also on HNN, Why We are Partly Responsible for the Mess that is Haiti by Thomas Fleming looks back at early days of Haitian independence. Barely ensconced in the White House, Thomas Jefferson and the French began negotiations for taking back the country. It's an exciting tale of international intrigue and ideological influence, a backstory to the Louisiana Purchase.

CNN provides a timeline of Haiti's history from the CIA World Factbook. In fact, CNN's Homepage is an excellent consolidated resource for continuously updated news approaching the devastation from multiple perspectives: history, economics, society, and culture.

To brush up on Haiti's revolutionary leader of the 18th century, visit Toussaint L'Ouverture Project, a wiki on the Haitian Revolution, 1791-1804, and linked blog relating materials to the present day. (While you'll find valuable essays and primary sources here, the provenance and credentials of its creators are obscure. As with any source material, cross-referencing is a good idea.)

We need a deeper understanding of the history and roots of poverty in Haiti, according to Teaching for Change.

Teaching for Change, a Washington, DC-based organization, encourages teachers and students to question and re-think the world inside and outside their classrooms. They, too, point out "While students should be encouraged to contribute to relief efforts, it is also important to gain a deeper understanding of the history and the roots of the poverty in Haiti. The US has been involved with Haiti for centuries, yet it has received little attention in textbooks or the curriculum." Teaching for Change recently posted a free, downloadable 43-page booklet, Teaching About Haiti. Their caveat: the book was last reprinted in 1994, and some of the statistics are dated; yet the history, songs, oral histories, and literature are very useful for students in elementary, middle, and high schools.

Edsitement from the National Endowment for the Humanities (NEH) offers a lesson plan for high school students including primary sources, student activity materials, and maps. "To Elect Good Men": Woodrow Wilson and Latin America" focuses on Wilson's attempts to carry out missionary diplomacy in Haiti and Mexico and the responses of selected Haitians and Mexicans.

5 Ways to Teach About Haiti Right Now and Resources for Teaching and Learning About the Earthquake in Haiti from The New York Times Learning Network offer lesson plans on past and recent Haitian history (and materials on natural disasters).

On the PBS Newshour, a ninth grader living in America writes about fear for his brother and other family members back in Haiti and his hopes for his native country in Haitian-American Teen Reflects on Haiti Disaster. For more about the effects of the disaster on Haitian children in America, also see an article and audio slide show, Haiti’s Aftershocks Felt at a School in New York, from the New York Times. The Times also provides continuously updated Perspectives on Haiti's Earthquake videos from Haitian citizens, academic experts, aid providers, and journalists.

On CBS, Catie Couric talks with Mark Schneider of the international Crisis Group and looks at the history of poverty and oppression in Haiti that has exacerbated the relief effort. (2:44 minutes, NOT commercial-free) The Crisis Group is considered the world’s leading independent, non-partisan, source of analysis and advice to governments, and intergovernmental bodies like the United Nations, European Union, and World Bank, on the prevention and resolution of deadly conflict. Materials about Haiti address the country's political, social, and economic conditions.

Also from CBS, A Haiti Primer: Haiti's History: Revolution, Subjugation gives a brief narrative of Haitian history from the time Christopher Columbus claimed the land he named Hispaniola for the King of Spain.

A search in the Abraham Lincoln papers in the Library of Congress yields letters to the President from various sources concerning plans to colonize Haiti with freed African Americans during and after the Civil War. In part, these plans developed as a corollary to white post-emancipation racial fears; in part, they were conceived to counter increased Spanish colonization of the island. Motivated by racism, America did not give diplomatic recognition to Haiti until 1862—long after most European nations.

Searching across collections in American Memory also turns up photographs of Haitian street scenes from the early 20th century and various historical maps.