Remember the Ladies—But Not Just in March 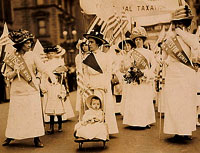 Shirley Chisolm, the first African American woman elected to Congress and the first woman to run for president of the United States in 1972, once stated, "Of my two 'handicaps,' being female put more obstacles in my path than being black."

It's perhaps a surprising point of view—but in light of the recent presidential election, perhaps not. The election brought both race and gender to the forefront, often on waves of euphoria pushed by hope that the nation has moved a long way beyond a culture of discrimination. But how far have we actually come, and how much farther do we need to go? Women's History Month in March, following on the heels of Black History Month, is a chance to examine the trajectory and distance of that progress. One question for teachers is how integrate this narrative into the curriculum.

Educators and historians question the value of isolating women's history—and African American history—by focusing on "firsts" or on prominent individuals—and by limiting this focus to one month a year. "Women's history exists always within the context of universal history," wrote historian Gilda Lerner. "[It] takes place within the context of the political and social life shared by men and women."

The resources below, while focusing on women, demonstrate that integration into the greater narrative of American and global history. They represent only a sample of available materials.

Solid preparation in women's history is now critical for history teachers . . . to enable them to present an accurate and inclusive version of American history.

A new book, Clio in the Classroom: A Guide to Teaching U.S. Women's History, edited by Carol Berkin, Margaret S. Crocco, and Barbara Winslow, (Oxford University Press, 2009) is central to the discussion of the place of women's history in the curriculum. Their goal, the editors explain, is to consider how to integrate women's history "into the traditional American history narrative." Clio in the Classroom approaches their goal in three categories: up-to-date overviews of American women's history divided into eras from colonial to the present; conceptualization of the issues in women's history; and approaches and materials for incorporating women's voices into the curriculum. An essay on applying the historical thinking process to women's history and a rich compendium of resources are part of the volume.

Women's History: a Quick Cyberguide, by Arnold Pulda on AP Central on the College Board website, addresses how to include women's history in the AP U.S. history course. "We may not have, say, two weeks to focus exclusively on women's history," Pulda writes, "but we do have 40 weeks to make sure that students take notice of the threads that make up the entire strand as we progress along its length, and to pay attention when that thread is more or less prominent in the whole, and why."

Links below lead to a few of the reviews and websites on women's history included in the Clearinghouse database of website reviews.

Teaching with images? The National Portrait Gallery of the Smithsonian hosts an online Flash exhibit, Women Of Our Time. The exhibit includes three sections: Gallery, Biographical Moments, and Styles Gallery summarizes women's advances and looks at notable women of achievement in business, politics, social movements, and entertainment. Biographical Moments includes a curator's explanation of the role of portraiture in documenting a life, providing insights into interpreting portrait photographs. Styles explores the work of individual photographers, including Edward Steichen and Louise Dahl Wolfe and places their work within the photographic conventions of their times.

Women's History Teaching Resources from the Smithsonian categorizes resources on women's history by race and ethnicity, professions, and events.

A YouTube series, Facts on Congress, includes a one-minute quick quiz on Women in Congress.

A search on the History Channel under video using the search term women yields audio and video files lasting 30 seconds to four minutes. Some are commentary: Maya Angelou tackles gender and race through comments about the Women's Movement and her memories of Eleanor Roosevelt and Rosa Parks. Some are historic footage: a newsclip from 1943 celebrates the first birthday of the Women's Auxiliary Army Corps, the predecessor of the Women's Army Corps. This video is both a primary and secondary source—it reveals multiple perspectives on contemporary attitudes toward women. (Brief commercial messages accompany many History Channel videos.)

A search through the P.O.V Blog (Point of View) on PBS provides lists of documentaries, including Chisholm '72: Unbought and Unbossed. The film is available through Netflix. The PBS site includes lesson plans and additional resources.

Also on PBS, the American Experience series offers a film on Woodrow Wilson. A full transcript of the program is available online, and the accompanying teachers guide offers a lesson on Women's Suffrage for grades 712. The lesson begins by pointing out that Wilson's first wife did not have the right to vote for her husband and branches from there into a look at phases of the women's suffrage movement, obstacles, and the Wilson administration's stance on women's suffrage.

American Women's History: A Research Guide, a resource from the Middle Tennessee State University Library, is an extensive gateway to collections of women's history resources—print, media, and digitized primary sources—grouped under 75 alphabetized topics ranging from abolitionists to writers to Hispanic Americans, philanthropists, sports, and work.

The Library of Congress window on materials about women's history, Women's History Month, leads to a wealth of materials recognizing "the creativity, imagination, and vitality of women throughout U.S. history." Materials still available from 2008 emphasized the theme Women's Art, Women's Vision.

Pathfinder for Women's History at the National Archives systematizes the hunt for resources through defined categories of Primary Documents, Monographs and Anthologies, and Reference Works.

For primary source documents, see Teaching With Documents: Woman Suffrage and the Nineteenth Amendment on the National Archives site.

A 12th-grade curriculum module from Annenberg Media, titled Gender-based Distinctions, analyzes the question, "When does the government have the right to treat men and women differently?" Students debate gender discrimination laws. Title IX, the Civil Rights Act of 1964 and the 1972 Amendments, and court cases are among examined materials. A video demonstrates classroom implementation of the lesson plan. Annenberg requires a login; online materials are free of charge.

Also from Annenberg: The Lowell System: Women in a New Industrial Society, Workshop Three of Primary Sources: Workshops in American History, illustrates through primary source documents just how much industrialization changed the lives of women. Documents, activities, videos, and lecture transcripts are available on the website.

And Annenberg recommends Remember the Ladies, correspondence between Abigail Adams and her husband, John Adams, in 1776, and speeches by Sojourner Truth, on the website for America's History in the Making. Also see the program Industrializing America to trace the developments leading to women's entry into the workforce en masse.

The Women In World History website includes a resource page, Teaching Women's Rights from Past to Present. Resources include lesson plans, links to primary source documents and analysis, and an emphasis on law and policy demonstrating a formal extension of women's rights.

In 2007, Scholastic Magazine asked filmmaker Anne Aghion about Women's History Month. Her response: it made her sad that Women's History Month was even needed, but, "The truth is, women still have to work harder than men do to succeed in certain professions." Scholastic's activities for students grades 58 include Women's Suffrage, a unit including interactive maps and quizzes and the stories of one woman who remembered casting her first vote in 1920.