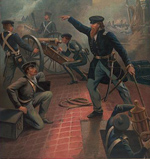 We history teachers who teach English language learners face a dilemma: how can we teach our students a rigorous history curriculum rich with opportunities to develop historical thinking, while making sure the language, and hence, concepts, are understandable?

Also, since most of us have a mix of different levels of language learners in our classrooms, along with students who speak and write non-academic English, how can we scaffold the language learning so that all students benefit, without dumbing-down the instruction?

While struggling with this dilemma over the years in my Oakland [CA] primary and middle school classrooms, I have experimented, often unsuccessfully, with various plans. Early on in my career with English learners, I de-complicated the curriculum, streamlined the vocabulary, chose one, usually very simple bit of very circumscribed critical thinking for my students to learn, minimized writing tasks, and effectively simplified out any messy historical thinking that could have taken place.

Early on in my career with English learners, I . . . effectively simplified out any messy historical thinking that could have taken place

My students felt great about learning a few content-specific words like “sarcophagus” and “scarab.” And yes, the majority of my students were understanding the content. But it came at the cost of learning real history, and my students certainly were not learning how historians think, much less write. We were scraping the bottom of Bloom’s taxonomic pyramid.

When I decided I wanted to improve this situation, I went in the opposite direction. I wanted to teach my students to question sources, read for bias, look for alternate perspectives, and find compelling evidence to prove arguments. This is difficult intellectual work for anyone, much less someone who struggles with the language in which such concepts are presented. But I pushed through, thinking that my contagious excitement and the students’ interest would facilitate understanding, just like they told me in Ed School.

We all know how that one ends: a very few of my students–those with a high level of academic English–analyzed, compared, evaluated and all those other high-end tasks that Bloom identifies. All of the other students struggled. And, most disturbingly to me, they didn’t learn the content or the historical thinking skills, and their English acquisition was stagnant.

What I realized in these two failures, was that my students—many of whom, as outsiders to the American mainstream were intensely interested in and perceptive about how societies function—needed an academic language in which to express their ideas about history.

I learned from educator and researcher Kate Kinsella that in order for students to access complicated history curricula, I needed to teach the vocabulary that would allow them to express complicated thoughts, and not just use interesting, content-specific words (think sarcophagus).

Once I had reframed English language development in the history classroom as academic language development, I realized that all students would benefit from this explicit language instruction because it allowed students of all levels to articulate historical thinking. Instead of teaching words like “scarab,” I should teach words that are key to the discipline, or what Kinsella calls “toolkit” words.

Key to this process, then, was to identify words that would frame the targeted historical thinking skill. When I taught my 8th-grade students about the Mexican-American War, our guiding question was, “What was the U.S.’s motivation in invading Mexico?”

Key to this process, then, was to identify words that would frame the targeted historical thinking skill

To understand many sides of this complex historical event, I wanted students to read and look for bias within primary sources, evaluate the trustworthiness of the sources, gather evidence to support an argument, and argue their point of view both in a Socratic seminar and in an essay.

To frame arguments about U.S. motivations in the Mexican-American War, and to do the type of historical thinking I wanted them to do, my students needed to be able to use the following words:

None of these words is specific to the Mexican-American War, but I was conscious that teaching these words explicitly, both orally and in writing, would benefit students in any further study of history and construction of argument.

I taught these words in the context of the arguments that the students were making about the war, and made sure to introduce them, as well as to re-teach them, using oral sentence frames. Therefore, I began teaching motivation by using an easily accessible example:

Students have different motivations to achieve good grades; some kids want to please their parents, while others like to feel they’ve done their best work

We then shifted to using the word within a historical context, and using it over and over again. For example, after reading primary sources, I would give all students a sentence frame:

Students would prepare this frame, state it aloud in pairs, then to the class, and, later, could use this construction in their Socratic Seminar and their essay.

Other frames that served my curricular purposes for this unit were:

This type of academic language development—development, in fact, of the linguistic tools of historians—facilitates English acquisition while also giving students tools to better understand content and to think critically about the content.

Students whose historical understanding might have been expressed inchoately without such framing can flourish with these tools.