What does it mean to "ask not what your country can do for you but what you can for your country"? Students learn the context of JFK's phrase and craft their own "Ask Not" messages. 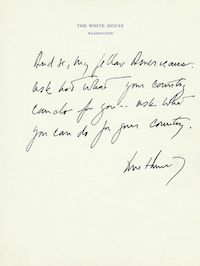 In this teaching module from the Shapell Manuscript Foundation in collaboration with the Roy Rosenzweig Center for History and New Mediastudents explore rare and historically significant manuscripts from Shapell collection. These include handwritten documents by President John F. Kennedy including notes recording his well known call to service "Ask not what your country can do for you, but what you can do for your country." Students use documents to learn more about what President Kennedy meant by service and then develop their own ideas about how what service means in their community.

Students work in small groups to analyze these documents and think through the kinds of service Kennedy engaged in. Kennedy's service include his military service in the navy during World War II that he volunteered for despite the fact that his medical issues excused him from the draft. Students also learn about Kennedy's policies such as the Peace Corps which promoted the idea that young people could serve the world in a variety of ways.

After analyzing these primary sources students work in groups to create their "Ask Not" video to encourage young people to engage in service to their communities. As a possible extension, teachers can invite community leaders into the classroom to view the video presentations and offer feedback on what local service opportunities exist for young people.