Myra Zarnowski teaches in the Department of Elementary & Early Childhood Education at Queens College, CUNY. A former elementary and middle school teacher, she has taught in grades 3, 5, and 7. 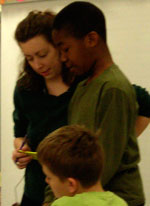 Picture book biographies can provide young readers with a great deal of information. Yet without a focus for reading, students often pay attention to interesting details and tidbits—what's been called the "terrific specifics"—rather than the big ideas in history. This guide focuses students' attention on two main ideas that promote historical thinking:

As they read and respond to picture book biographies, students will see fundamental differences between the past and the present and witness the impact some people had on the times in which they lived. Though they were sometimes criticized for inappropriate or outrageous behavior, to quote historian Laurel Thatcher Ulrich's famous slogan, "Well-behaved women seldom make history." To this I would only add, or men. (While this guide is primarily concerned with the values and character traits of women who made history, it could easily be extended to include men as well.)

First students read and discuss picture book biographies of women in history. With their teacher, they build a data chart of information about each woman, highlighting her historical setting, accomplishments, and character traits. Finally students apply what they learn to several writing projects focused on historical context and social change. While the focus of biography is on individuals, students will see they did not, and could not, succeed alone but were supported along the way by others.

Teacher Preparation
In the Classroom: Constructing the Data Chart

[All examples are from A Woman for President: The Story of Victoria Woodhull (2004) by Kathleen Krull, illustrated by Jane Dyer]

Concept Formation
Discovering Angel Island: The Story Behind the Poems
Using Old Maps as Tools to Explore Our World
Why Did It Happen? Making Claims about Cause and Effect
Picturing the American Revolution
Researching for a Research Topic