Begging Leave to Inform the Publick 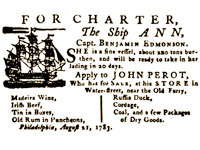 What products could be sold during the American Revolution and would there be any classified ads in newspapers during that time?

Although merchants were not selling certain "unpatriotic" items (such as tea or, perhaps, portraits of King George), generally, if they could find goods to sell, they were free to advertise for buyers.

Local civic authorities sometimes bought up available stocks of weapons, ammunition, food, and other supplies that could be sent to the armies. They bought from private suppliers, who then had less to sell to the public, and this caused shortages. The colonies, by design, had been heavily dependent on Britain for their manufactured goods, and the war disrupted the supply, although some of these goods were smuggled in or imported from other countries that were not inclined to ally themselves with Britain.

The disruption in imports led some merchants to price gouging, and some localities set up committees to fix prices. An April 1776 issue of the Philadelphia newspaper, The Pennsylvania Magazine, announced that the city's committee had set prices on loaves of white bread, for example, depending on their weight, and had determined that the scarcity of some goods in the market was artificial, and so had fixed the prices of rum, molasses, coffee, cocoa, chocolate, pepper, and loaf sugar.

Newspapers of the time carried advertising. Printing technology was simpler then. The ads were arranged in columns, much like the classifieds in today's papers. Only very rarely were tiny images of ships, houses, horses, or people included.

Merchants advertised goods they had in stock, such as book titles, apothecary preparations, or ship stores, and individuals advertised items they had for sale, such as land, houses, businesses, ships, and livestock. Shopkeepers advertised when they moved their places of business.


The ads were arranged in columns, much like the classifieds in today's papers.

Innkeepers advertised the virtues of their taverns. Owners of coach lines advertised for travelers and mail delivery. Book publishers of hymnbooks and almanacs advertised for pre-publication subscribers. Individuals also "advertised" lost items and found items, including runaway slaves, indentured servants, horses, and pocket books. Victims of crimes advertised rewards for the capture of the criminals who had wronged them, as in this example, from The Pennsylvania Gazette:

WHEREAS I, the subscriber, between nine and ten o'clock, in the night of the 22d of October last, was attacked by ill-designing persons, between Andrew Smith's tavern and Matthias Holebach's, with clubs, who knocked me down, and beat me in an unmerciful manner, until they thought I was dead, and robbed me (as is supposed) of my pocket-book, in which were Forty-Seven Dollars in Continental currency, besides some small bills; I do therefore offer the reward of Six Dollars to any person who shall find the said pocket-book and money, provided it was lost at the time. I was defending myself, before I was overpowered by the villains, but if they have robbed me of it, I hereby promise the reward of FIFTY DOLLARS for apprehending the thief or thieves, so as they be thereof convicted, and the pocket-book and money delivered to me. CASPER WEAVER.

The persons of slaves and the time of indentured servants were sold by means of newspaper ads. Employers advertised for employees and apprentices, and people seeking more convenient housing placed ads. Civic authorities and organizations placed notices that announced their activities. Notices of probate also appeared, as they do in today's newspapers. Other public notices, required then as they are today for the legal disavowal of debts, sometimes suggested tangled threads of intrigue, as in a pair of ads that appeared together in The Pennsylvania Gazette not long after the end of the war:

WHEREAS MERIAM, the wife of me the Subscriber, has left my bed, and has at several times run me in debt without my leave: This is therefore to forbid all persons trusting her upon my account, for I am determined not to pay any debt that she shall contract (without my leave) from the date hereof. HEZEKIAH GIBBS, jun.

WHEREAS the subscriber is appointed Guardian to HEZEKIAH GIBBS, jun., he therefore desires all persons indebted to said GIBBS to make payment, and all to whom he is indebted to bring in their accounts in order for settlement; and hereby cautions all persons from trusting the said GIBBS in future, as debts of his contracting, from the date hereof, will not be paid by the subscriber. And whereas said GIBBS has lately advertised MERIAM his wife, and used her very ill without the least cause, this is therefore to request the publick would not form an opinion of her from his assertions, as they are entirely groundless. EPHRAIM FAIRBANKS.

Ads like these allow a glimpse of life that is not entirely unfamiliar to readers of the personals columns in today's newspapers.