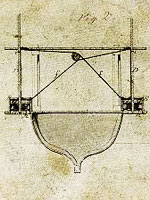 Was Abraham Lincoln the only president with a patent?

Many presidents have been intensely interested in science, technology, and invention. Early presidents signed the certificates that the Patent Office issued, and collectors of these certificates sometimes refer to them as "Presidential patents." But Abraham Lincoln was the only president to receive a patent himself.

Congressman Lincoln received Patent #6469 for "A Device for Buoying Vessels Over Shoals" on May 22, 1849. It was a set of inflatable bellows that attached to each side of the hull of a flatboat and that could be inflated by a windlass connected with upright poles to the bellows if the ship was about to run aground in shallow water. The idea was to increase the buoyancy of the flatboat and make it draw less water. It was never marketed. Unfortunately, its added weight when it was not inflated made the ship lie lower in the water, which, in turn, made the vessel more likely to run aground in the first place. The Smithsonian's Museum of American History displays the model of the invention that Lincoln had to submit along with his patent application. The model "looks as if it had been whittled with a knife out of a shingle and a cigar box," as one account describes it. The Museum's excellent blog entry for November 29, 2009, discusses the patent in the larger context of U.S. presidents' interest in invention. It also links to the museum's rich online exhibit, "Abraham Lincoln: An Extraordinary Life," one section of which "A Would-be Inventor" thoroughly documents Lincoln's patent.

Lincoln's patent application was almost certainly the result of a problem he had encountered years before when he was piloting a flatboat. Lincoln made two long trips by flatboat, one in 1828 when he was 19 and one in 1831 when he was 22. There was no problem with the boat on the 1828 trip, when he and another man, Allen Gentry, piloted a flatboat from Rockport, Indiana, down the Ohio and Mississippi Rivers carrying produce from Gentry's father's store to New Orleans. Lincoln was paid $8 a month (for 3 months) and given passage home on a steamboat.

Lincoln's patent application was almost certainly the result of a problem he had encountered years before when he was piloting a flatboat.

His second trip, however, was more eventful. In the spring of 1831, a business entrepreneur from Springfield, Illinois, Denton Offut, hired Lincoln and two other men to take a flatboat from Old Sangamon town on the Sangamon River, near Springfield, to New Orleans. Offut could find no available boat in the area, so he hired Lincoln and the others to fell timber and build a boat which took them a month. They loaded it with produce and launched it. When they reached the little village of New Salem, 20 miles downstream, a drama unfolded, as Ida Tarbell later described it:

"At the village of New Salem there was a mill-dam. On it the boat stuck, and here for nearly twenty-four hours it hung, the bow in the air and the stern in the water, the cargo slowly setting backward [as it took on water]—shipwreck almost certain. The village of New Salem turned out in a body to see what the strangers would do in their predicament. They shouted, suggested, and advised for a time, but finally discovered that one big fellow in the crew was ignoring them and working out a plan of relief. Having unloaded the cargo into a neighboring boat, Lincoln succeeded in tilting his craft. By boring a hole in the end extending over the dam the water was let out. This done, the boat was easily shoved over and reloaded. The ingenuity which he had exercised in saving his boat made a deep impression on the crowd on the bank. It was talked over for many a day, and the general verdict was that the 'bow-hand' was a 'strapper.'"

"Short Autobiography Written at the Request of a Friend to Use in Preparing a Popular Campaign Biography in the Election of 1860," in John George Nicolay and John Hay, eds. Abraham Lincoln: Complete Works, Comprising His Speeches, Letters , State Papers, and Miscellaneous Writings, Vol. 1. New York: Century Company, 1907, pp. 640-641.

Spencer County, Indiana, in 2008, sponsored a goodwill recreation of Lincoln's 1828 flatboat journey with a 26-day trip down the Ohio and Mississippi rivers from Rockport, Indiana, to New Orleans, on a reconstructed flatboat in an event it called "Lincoln's Journey of Remembrance" as part of the national celebration of the centennial of Lincoln's birth. One of the participants posted a blog of the trip.

Detail of daguerreotype of Lincoln, ca. 1846-47, perhaps during his Congressional term, Library of Congress.