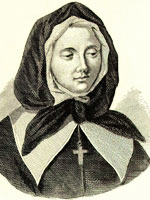 What services did women of religious orders provide in New France?

Women of religious orders were active in New France mainly in founding schools and hospitals. Three religious orders were present almost from the time of the earliest French settlements. Jesuit Relations reports, first published in 1611, inspired many founders of these religious communities to travel to New France. Reports narrated the adventures and trials of the earliest Jesuit missionaries who accompanied French explorers and trappers. The religious orders of women that soon followed established the first schools and hospitals in the colony and were among the first women to arrive in New France. The most important of these communities were:

The Ursulines were the first nuns to arrive in New France, in 1639, led by Marie de l'Incarnation. She and the other Ursulines who accompanied her established a convent in Quebec, where they started the first school for girls in North America. The pupils were both Native and French girls. Ursuline communities and schools spread throughout New France, eventually reaching as far south as New Orleans, where a community was established early in the 18th century. As their communities spread west, they founded schools to educate Native American girls.

These Augustinian religious women also came to Quebec in 1639 and founded a hospital, the Hôtel-Dieu in Quebec (the first in North America north of Mexico). They staffed another, the Hôtel-Dieu, in Montreal in 1645. The Hospitalières also founded schools for girls, including nursing schools, as well as other institutions to care for the poor and the sick.

St. Marguerite Bourgeoys began this noncloistered religious order and, in 1658, established a girls' school in Montreal. This was the first of many boarding schools and day schools run by the order throughout New France. The first bishop of Canada, François de Montmorency Laval, highly encouraged and supported these communities of religious women.

Some from Marie de l'Incarnation to her brother.

The Library and Archives of Canada, full text of the 40 volumes of the Jesuit Relations.

An anthology of selections from the Relations:
Allan Greer. The Jesuit Relations: Natives and Missionaries in Seventeenth-Century North America. New York: Bedford/St. Martin's, 2000. Bedford Series in History and Culture.