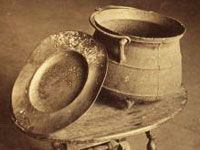 What were the primary concerns of life in the New World?

Let me somewhat arbitrarily focus the question more specifically on the earliest English explorers, adventurers, and settlers in Virginia and Massachusetts in the first half of the 17th century.

Reading their published accounts gives one the impression that their lives alternated between extremes of feast and famine, between health and sickness, between sublime ease and almost unimaginable hardship, and between periods of contentment and even boredom and periods of sharp fear and terror interspersed with periods of sheer joy. Supplementing those accounts, however, with evidence from rather more mundane sources such as probate and account books, old court records, and modern excavations of kitchen middens from colonial sites, yields a larger story of people organizing and conducting their work and family lives in ways similar to ours today.

Captain John Smith published A Description of New England in 1616 in London, in which account he sought, among other things, to recruit English settlers. In it he declared:

Worthy is that person to starve that here cannot live; if he have sense, strength and health: for there is no such penury of these blessings in any place, but that a hundred men may, in one houre or two, make their provisions for a day: and he that hath experience to manage well these affaires, with fortie or thirtie honest industrious men, might well undertake (if they dwell in these parts) to subject the Salvages, and feed daily two or three hundred men, with as good corn, fish and flesh, as the earth hath of those kindes, and yet make that labor but their pleasure; provided that they have engins, that be proper for their purposes.

The first minister in the Massachusetts Bay Colony, Reverend Francis Higginson, acting, like Smith, as a kind of colonial recruiter, published New-England's Plantation; or, a short and true description of the commodities and discommodities of that countrey in 1630 in London. In it, he praised the "fat black earth" around the Charles River in Massachusetts. The land, he said, was extremely fertile, and was well suited to the plow. "It is scarce to be believed how our kine and goats, horses and hogs do thrive and prosper here, and like well of this country." He bragged of the vast harvest of corn, turnips, parsnips, carrots, watercress, "pumpions," "cowcumbers," and herbs. He wrote that the colonists also planted and harvested mulberries, plums, raspberries, currants, chestnuts, filberts, walnuts, cherries, and strawberries.

He wrote about the abundance of game: deer and bear, as well as the other animals, listing wolves, foxes, beavers, otters, martins, great wild cats, and "a great beast called a molke"—most probably a moose. The abundance of fish was "almost beyond believing." Cod, mackerel, bass, and sturgeon; oysters, clams, mussels, and lobsters were easy to catch or gather. Of lobsters, Higginson wrote that "the least boy in the Plantation may both catch and eat what he will of them. For my own part, I was soon cloyed with them, they were so great, and fat, and luscious. I have seen some myself that have weighed sixteen pound; but others have had diverse times so great lobsters as have weighted twenty-five pound, as they assured me."

Higginson commended the "temper of the air" of New England as healthful. He noted that summers were hotter than in England and winters were colder, but he said that the cold was not so bad because of the ease of getting firewood. "Here is good living," he wrote, "for those that love good fires."

Higginson's improbably upbeat list of New England's "discommodities" was much shorter: First, mosquitoes; second, the snow and cold of winter; third; poisonous snakes; and fourth, the lack of more settlers. This last "discommodity" is telling, and does much to explain the hearty promotional tone of the rest of his description.

In fact, many of the first settlers, both in Massachusetts and Virginia, died of starvation, which especially afflicted them during the first winters. Several times, Indians brought them some relief with baskets of corn and game.

Diseases of one kind or another also took their toll. Some of these they brought with them, such as smallpox. Some of them, like dysentery and scurvy, were the result of malnutrition or lack of fresh drinking water. The sheer physical difficulties involved in exploration and in building a settlement in the wilderness also presented tremendous hazards to those that undertook the work.

Shipwreck was also common, especially from the hurricanes and nor'easters that were novel to them. Shipwrecks not only endangered their own lives but also imperiled the re-provisioning of the colonies from England. This was especially critical in the first years of the settlements, when their vulnerability was increased by the fact that they had to depend on ships to supply them, not just with food, but also with basic goods, such as gunpowder, firearms, tools, iron, and cloth.

Colonel Henry Norwood's pamphlet, A Voyage to Virginia, described his harrowing trip in the fall of 1649 from England, in which his ship met storms off the coast of Cape Hatteras and they were blown offshore. He and a small party of others were eventually marooned on an uninhabited island off the coast of Maryland and nearly starved until being rescued by Indians and carried by them to the colony at Jamestown:

Of the three weak women before mentioned, one had the envied happiness to die about this time; and it was my advice to the survivors, who were following her apace, to endeavour their own preservation by converting her dead carcase into food, as they did to good effect. The same counsel was embrac'd by those of our sex; the living fed upon the dead; four of our company having the happiness to end their miserable lives on Sunday night the day of January___. Their chief distemper, 'tis true, was hunger; but it pleased God to hasten their exit by an immoderate access of cold, caused by a most terrible storm of hail and snow at north-west, on the Sunday aforesaid, which did not only dispatch those four to their long homes, but did sorely threaten all that remained alive, to perish by the same fate.

The colony in Virginia was established in the midst of the Algonquian nation of Powhatan, and the Plymouth Colony on the land of the Wampanoag tribe. Relations with the Indians were sketchy and volatile, consisting of periods of friendship interspersed with periods of fighting, sometimes alongside the Indians of one tribe against its enemies from other tribes. The colonists traded metal implements and cloth for food, furs, and land. But they also carefully constructed fortifications and palisades to protect themselves against the almost certain eventuality of attack by the various tribes and nations of Indians among whom they settled. Both colonies suffered large loss of life from Indian attack.

All in all, much of the earliest settlers' time and energies were devoted to providing for their basic, physical subsistence and doing what they could to ensure their survival. Much of the colonies' early precariousness was due to not having yet cleared and planted enough land to ensure harvests that would not only provide the colonists daily fare, but would also allow a surplus to draw upon during times of scarcity.

Until about the mid-20th century, historians largely worked from the writings of the colonists and explorers to understand what colonial life was like. But those writings offered only a very selective picture. For the past several decades, detailed research by archeologists and archivists into the material culture of the colonists has dramatically broadened and sometimes corrected the historical picture.

The History of Jamestown at Preservation Jamestown.

The Plymouth Colony Archive Project at the University of Virginia.

Images:
"The settlers at Jamestown," William Ludwell Sheppard, 1876, from Pioneers in the settlement of America: from Florida in 1510 to California in 1849. Boston: Samuel Walker, 1876-1877. New York Public Library.