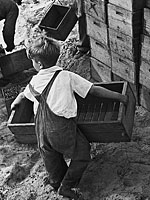 The short answer is this: If you mean full-time work (with certain exceptions) ―none were employed, at least legally.

This was the result of the signing into law in 1938 (two years before) of the Fair Labor Standards Act. Wake Forest University Economics Professor Robert Whaples puts it succinctly: "the Fair Labor Standards Act of 1938 prohibited the full-time employment of those 16 and under (with a few exemptions) and enacted a national minimum wage which made employing most children uneconomical." Whaples describes the various reasons, apart from the enactment of federal, state, and local laws, why the numbers of children working in industry and on the farm had already declined dramatically over the first few decades of the 20th century before the passage of the Act.

The FLSA, as further defined by statute, prohibited children under 16 from any kind of employment in certain hazardous kinds of work. The Secretary of Labor has periodically revised such categories of hazardous work. For agricultural work, for example, those under 16 should not be employed in operating a tractor of over 20 horsepower, or a hay baler, a forklift, a power post-hold digger, or a chain saw. Nor should they work in a yard or stall in which there is a bull, boar, or stud horse, a sow with suckling pigs, or a cow with newborn calf.

The FLSA also prohibits those under 18 from certain kinds of occupations altogether. These include occupations that require working with explosives or radioactive materials, operating most power-driven woodworking, baking, or meat processing machines, as well as most jobs in mining, meatpacking, logging, and brick-making.

The FLSA exempts certain kinds of work, including employment of children by their parents, and church work. Boys and girls also worked (as they do today) at jobs not covered by FLSA regulations, such as office or clerical work, retail sales positions, food preparation, caring for younger children, and so on.

Given these exemptions, what was the actual number working in 1940?

Gertrude Folks Zimand, General Secretary of the National Child Labor Committee, in "The Changing Picture of Child Labor," published in 1944 in the Journal of the American Academy of Political and Social Science (pages 83-91), reported that the 1940 census showed, among 14- to 15-year-olds, a total of 4,347,665 attending school, and a total of 209,347 gainfully employed (no number was reported for children ages 7-14 who were not in school but were gainfully employed, but the number of these children attending school was 15,034,695; the numbers for 16- to 17-year-olds were 3,361,206 in school and 662,967 gainfully employed). The term "Gainfully employed" included full- and part-time work, either in industry or agriculture. There was some overlap in these numbers because some children were in school but were also working, at least part-time. But according to Zimand, 64 percent of the 14- to 15-year-olds and 83 percent of the 16- to 17-year-olds who were working were out of school and were therefore presumably working full time.

The text of the Fair Labor Standards Act of 1938, as amended.

Donald M. Fisk. "American Labor in the 20th Century" at the Bureau of Labor Statistics.

"Child Labor Laws and Enforcement," chapter 2 of the Report on the Youth Labor Force (revised 2000) at the Bureau of Labor Statistics. This includes a brief history of child labor in the U.S. and the legislative restrictions governing it, as well as a discussion comparing aspects of youth employment in the U.S., such as temporary or part-time teen employment, with youth employment elsewhere in the world.

The Child Labor Public Education Project's website on Child Labor in U.S. History provides links to a variety of documents on child labor.