Did you know that Kennedy considered softening the national platform on Cuba?

Kennedy and Castro: The Secret History 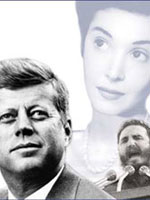 This site focuses on an abrupt change in U.S. policy toward Cuba in 1963. The site includes an audio file of a conversation (3.5 minutes) between Kennedy and his national Security Advisor, McGeorge Bundy, that took place 17 days before Kennedy was assassinated. Kennedy and Bundy discussed taking a softer approach toward Fidel Castro and Cuba, and Kennedy agreed to have secret talks with Castro under the right circumstances. Castro claimed to be open to the idea as well.

The site includes several other supporting items, including eight recently declassified top-secret documents and memoranda supporting and setting up talks between Kennedy and Castro.

The documents indicate that Kennedy saw little advantage in continuing the hard line stance of the U.S. against Castro and Cuba, and believed that a softer approach held strategic value in normalizing relations between the two countries. The papers make it equally clear that Kennedy's successor, Lyndon Johnson, retracted Kennedy's offer.

This site offers three CIA briefing papers and a transcript of a message from Castro to Kennedy. A mini-scorecard allows visitors to track the key figures in the talks. This site allows researchers, students, and teachers access to previously unavailable material, and would be a useful resource for Cold War studies.