A Clear Shot across the Continent 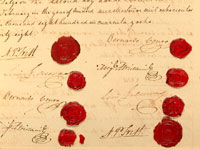 What territories did President Polk gain after the war with Mexico?

Just before James K. Polk became president in 1845, Texas was admitted to the Union. Polk was an “expansionist,” an enthusiastic supporter of Texas annexation. In order to balance the new southern territories, he also looked for a way to bring northern territories into the Union.

As a result, in 1846 the U.S. signed the Oregon Treaty with Britain, essentially settling, as U.S. territory, the land south of the 49th parallel (and as British territory, the land north of it). This extended the northern continental U.S. boundary to the Pacific as it stands today, including the states of Oregon, Washington, and Idaho.

The Treaty of Guadalupe Hidalgo, which formally ended the Mexican War, was signed in February 1848. It ceded the formerly Mexican territories of Alta California and Santa Fe de Nuevo México to the U.S. By this treaty, Mexico also recognized the U.S.'s annexation of Texas, and recognized the Rio Grande as its border with the U.S.

Out of this territory, much of the present-day states of Arizona, New Mexico, Utah, Nevada, and California, as well as large portions of Wyoming and Colorado, were eventually created. When Polk submitted the treaty to the Senate for approval, opposition came equally from Southern Democrats who wished even more land from Mexico and from Northern Whigs, who did not wish for any land from Mexico whatsoever. U.S. politicians clearly saw that the accession of land in the South would have consequences for the political balance of power in Congress on the issue of slavery. Nevertheless, the Senate ratified the treaty.

Five years later, in 1853, with the Gadsden Purchase (during President Franklin Pierce’s administration), the U.S. added the land south of the Gila River and West of the Rio Grande. Today, that area comprises the southern portions of the states of Arizona and New Mexico.

It may seem ironic today (as it did to some even at the time), but Polk was often praised as a “great champion of liberty” because his territorial acquisitions pushed outward the “boundaries of democracy.”

Jason Porterfield, The Treaty of Guadalupe-Hidalgo, 1848: A Primary Source Examination of the Treaty That Ended the Mexican-American War. New York: Rosen Publishing Group, 2006. [Aimed at middle and high school students]

For an example of a contemporary of Polk’s finding the President’s expansionism darkly ironic, see the New York Evening Mirror’s editorial comments on his inauguration speech, “President Polk a Humorist,” reprinted in William Lloyd Garrison’s The Liberator, March 21, 1845.

Detail of signatures on the last page of the Treaty of Guadalupe-Hidalgo, Library of Congress, Hispanic Reading Room.