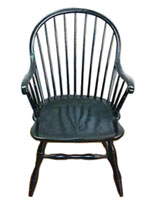 Can you suggest any sources for a furnishing plan for a 1790 second floor bedroom of the house of a well-to-do 3rd generation Scots-Irish farm family who lived just north of Harrisburg, Pennsylvania?

Depending on how much information you already have about the house, you might have to begin with examples of basic architectural plans of other houses from the time that are roughly in the same area. A good place to look for this is in the Historic American Buildings Survey (a New Deal project), all of which is now available online from the Library of Congress.

Architectural drawings, made during the 1930s, of a wide variety of almost 40,000 historic buildings around the country are provided, as well as photographs, and written descriptions, including notes on changes and additions that had been made since the buildings were first completed. An example from the database is the documentation of the William Maclay Mansion, built in downtown Harrisburg in 1793.

Diagrammatic plans of 18th-century houses showing the placement of furnishings do not exist. Nor are there photographs to consult, obviously. Paintings present an opportunity and a challenge: A family getting its portrait painted would often ensure that the painter include an array of the family’s prized possessions in the background. There are a few places where you can see such paintings as well as large collections of actual pieces of early American furniture, identified by date and place of manufacture:

However, when families had their photographs taken in the mid-19th century and later, they often rearranged their furnishings to bring all their treasures into the picture—even dragging armoires and organs outside if the photo was taken there. Consequently, even if domestic portraits of an earlier period often showed plenty of furniture, it was not necessarily arranged as it would have been in normal use.

In addition, it was still common practice for portraitists to surround the people in their paintings with objects that indicated their social position or their profession or accomplishments, such as a pet parrot next to a Nantucket ship captain, showing the “souvenir” he had brought back from one of his voyages.

This is all caution against expecting the arrangement of domestic furnishing in posed paintings to reproduce how a room would have looked if one had walked into it on an ordinary day.

Local historians and curators of historic residences have furnished houses in Pennsylvania. You can visit these and get ideas from them:

One problem in describing a “furnishing plan” is the fact that most of the furnishings of houses at the time, with the exception, perhaps, of the largest pieces, like beds, were often moved from room to room, depending on transient needs. This was especially true of rooms, such as upstairs bedrooms, where company was not received.

Even famous houses of the 18th century that were later restored—such as Washington’s Mount Vernon or Jefferson’s Monticello—have generally only had their furnishings restored in an impressionistic way. Not strangely, house owners do not and did not ordinarily make lists of their furnishings, much less room by room. And most people, even relatively wealthy ones, did not accumulate anywhere near as many items of furniture as people do today.

Except for the very wealthiest people in the 18th century, and well into the 19th century (when furniture became mass-produced and relatively less expensive), most people’s sleeping room would have had only a bed, a chest, and perhaps a chair and a small table. A spinning wheel might also have found space there.

Sometimes, letters from the time mention items of furniture—if they’ve been broken or replaced or given as wedding gifts or in token of friendship or esteem. That can be helpful in reconstructing a family’s furnishings.

Another place to look is in wills, inventories, and probate records. Specific items of furniture are often recorded there, as they are disbursed to the next generation. It is sometimes evident where the deceased lived and some information is often provided about social status and occupation. Historian Barbara Clark Smith, elsewhere on this website, shows how useful this can be by looking an example of an 1804 probate inventory of the possessions of Thomas Spring of New Castle County, Delaware.