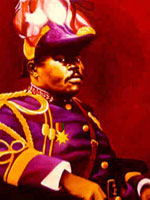 The life and work of black activist Marcus Garvey (18871940) are presented on this website. Garvey was the leader of the Universal Negro Improvement Association (UNIA), and "champion of the back-to-Africa movement." Materials include 40 documents, such as correspondence, editorials, reports of U.S. Department of Justice Bureau of Investigation agents, articles from African American newspapers, and a chapter from Garvey's autobiography. Primary documents are accompanied by 15 background essays.

The website also provides four audio clips from recordings of speeches Garvey made in 1921 and 24 images, including photos of Garvey, his wife, and colleagues, and facsimiles of UNIA documents. Particularly valuable as a condensed history of Garvey's movement and also useful for those studying African American political and cultural movements in general.