Refugees from the American Revolutionary War 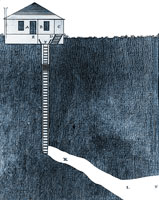 I am studying the displacement of people during times of war. Were there refugees from the American Revolution? If so, who were they, why did they become refugees, and where did they go?

Contemporary Americans often picture the War for Independence as a straightforward struggle between American patriots and the British crown over the political independence of the colonies. The reality is far more complex: the colonists did not represent a homogeneous bloc, and in some senses the conflict resembled a civil war over political sovereignty in the colonies. Like all civil wars, it extracted a toll on the civilian population, many of whom who found themselves displaced and their lives disrupted by the military and political struggle being played out in North America.

Not every inhabitant of the colonies in 1776 supported the Declaration of Independence and the political break from the English crown. It is impossible to know precisely how many supporters the Patriot forces enjoyed (especially when announcing one’s allegiance was a potentially risky move), but modern historians estimate that, at most, the Patriots enjoyed a bare majority of popular support—that is, no more than half the residents of the colonies supported the cause of independence. Between one-sixth and one-fifth of the residents of the colonies remained loyal to the British crown; the remainder of the population did their best to avoid an open declaration of their sympathies, since “fence-sitting” was often the safest political and practical course.

Fully fifteen to twenty percent of the residents of the North American colonies retained their allegiance to the crown during the conflict. These loyalists presented some serious challenges to the Patriot forces mounting the War for Independence, already strained by the demands of fighting the world’s most powerful military with scarce resources and an embryonic government. Loyalists threatened to provide information or material support to British forces, and the stakes involved in the struggle—in the eyes of the Crown, after all, the Patriots advocating treason in their push for independence—led the Patriots to deal with Loyalist elements harshly at points in the struggle. Desperate to deter loyalists from overtly supporting British forces, Patriots imposed loyalty oaths on colonists suspected of British sympathies. Other Loyalists had their land confiscated; by war’s end, the hostilities had forced some 60,000 Loyalists to leave their homes in the thirteen colonies and relocate to England or to other parts of the empire.

The 1994 PBS film Mary Silliman’s War does an excellent job of demonstrating many of the tensions the War for Independence created in local communities, and the ways in which civilians caught between two warring armies attempted to continue their lives against a backdrop of conflict and civil war. The film is based on the true story of Mary Silliman, whose husband Selleck actively prosecuted Loyalists for treason as the state’s attorney for Connecticut. After winning a death sentence for two Fairfield men, their relatives kidnap Selleck and threaten to hang him if the convicted Loyalists ascend to the gallows. In charting Mary’s efforts to secure her husband’s release, the film vividly portrays the often insoluble dilemmas faced by civilians during what remained (until the 1970s) America’s longest war.

Sarah F. McMahon, "Mary Silliman's War: A Convincing Social Portrait," review of the documentary, at the website of the American Historical Association.

Images:
"A view of the guard-house and Simsbury-mines, now called Newgate - a prison for the confinement of loyalists in Connecticut," published in London, 1781. Prints and Photographs Division, Library of Congress.

"The Procession" and "The Tory's day of Judgment," prints by Elkanah Tisdale, 1785. Prints and Photographs Division, Library of Congress.