Explore the history of the moon itself, as well as how we reached it. 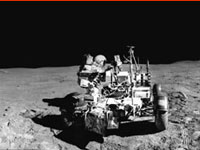 Of historical interest primarily for specialists who deal with the history of the United States space program, this site is the online companion to the PBS special of the same name. It includes a full transcript of the broadcast program, as well as several fascinating features. Visitors can access six panoramic photographs taken by various astronauts on the moon, as well as eight audio files of noted astronauts (including Buzz Aldrin discussing the Apollo 11 mission and Jim Lovell discussing the ill-fated Apollo 13 mission). Each audio file lasts approximately one to two minutes, and includes a transcript. Of particular interest is the essay by Eugene Cernan, the last U.S. astronaut to walk on the moon, and a 3,000-word essay on the origins of the moon, written by a noted astronomer. The personal stories may be of value as primary sources, but otherwise the site has limited historical value.