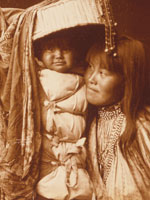 How did Native American women give birth, or what were their practices or beliefs in giving birth?

In the seventeenth century, Dutchman Adrien Van der Donck described a woman’s preparation for childbirth among the Mohawk and Mahican Indians in what is now known as New York. He stated that pregnant women would “depart alone to a secluded place near a brook, or stream of water . . . and prepare a shelter for themselves with mats and coverings, where, provided with provisions necessary for them, they await their delivery without the company or aid of any person. . . . They rarely are sick from child-birth [and] suffer no inconveniences from the same.” Many similar descriptions of solitary, painless births exist among European observers of the Native Americans, but because most of these observers were men, and men rarely attended the birth of children, these descriptions are probably inaccurate. Although each indigenous culture had its own unique beliefs and rituals about childbirth, scholars believe that many First Peoples shared certain practices involving the participation of close family members and select others within the community.

During their pregnancies, women restricted their activities and took special care with their diet and behavior to protect the baby. The Cherokees, for example, believed that certain foods affected the fetus. Pregnant women avoided foods that they believed would harm the baby or cause unwanted physical characteristics. For example, they believed that eating raccoon or pheasant would make the baby sickly, or could cause death; consuming speckled trout could cause birthmarks; and eating black walnuts could give the baby a big nose. They thought that wearing neckerchiefs while pregnant caused umbilical strangulation, and lingering in doorways slowed delivery. Expectant mothers and fathers participated in rituals to guarantee a safe delivery, such as daily washing of hands and feet and employing medicine men to perform rites that would make deliveries easier.

As the birth grew closer, women and their families observed other rituals to ensure an easy and healthy birth. Nineteenth-century anthropologist James Mooney recorded one Cherokee ritual intended to frighten the child out of the mother’s womb. A female relative of the mother would say: “Listen! You little man, get up now at once. There comes an old woman. The horrible [old thing] is coming, only a little way off. Listen! Quick! Get your bed and let us run away. Yu!” The female relative then repeated the formula, substituting “little woman” and “your grandfather,” in case the baby was a girl. Van der Donck described a Mahican concoction made of root bark that the mother drank shortly before labor began. Many indigenous peoples used similar remedies. Cherokee women drank an infusion of wild cherry bark to speed delivery.

Despite numerous descriptions of solitary births, other accounts describe births attended by a midwife and other close family members. Men were rarely allowed in the birth room, and they were never allowed to see the birth. A woman in labor stood, knelt, or sat, but she never gave birth lying down. Usually no one bothered to catch the baby, who fell onto leaves placed beneath the mother. Van der Donck and Mooney described post-delivery rituals in which the mothers ceremonially plunged the infant into the river, an act they repeated daily for two years. British Lieutenant Henry Timberlake, an envoy to the Cherokee in the mid-eighteenth century, stated that this ritual made “the children acquire such strength, that no ricketty or deformed are found among them.”

European descriptions of Native American women’s quick recovery from childbirth may have been exaggerated. But generally, Indian women’s excellent physical conditioning certainly aided in their recovery from childbirth. Barring any serious complications – which, of course, did happen occasionally – Native American women returned to their regular duties in a very short period of time.