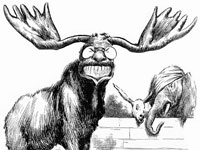 What issues influence a person’s interpretation of a political cartoon from the past?

To understand a political cartoon from the past, you have to have a good understanding of the historical events and persons depicted in it, as well as an appreciation of the symbolic currency of the time, specifically, the stock characters and objects that contemporary artists and commentators used to carry their points. This might include such things as the songs, music, poetry, literature, sports, clothes fashions, and celebrity figures of the time. Without this last sort of knowledge, you are liable to miss the point of the cartoon—or at least the sharpness of the point.

You could read into it, for example, today’s meaning of the words and symbols that the artist used, when in fact, it may have changed. The artist and his audience inhabited the same culture and may have shared assumptions that we may not. Bringing these into the light not only reveals the actual intent of the cartoonist, but also reveals to us how parts of our own cultural and political landscape have changed.

History teachers nowadays often introduce political cartoons from the past into their lessons, asking their students to analyze them. Partly, this stems from trends in social history that have newly emphasized the value of looking at the more everyday, ephemeral aspects of culture in trying to understand the past. Partly, too, it stems from the notion that today’s students are much more attuned to visual images than to written texts. Lastly, it fits into the educational emphasis on introducing students to multiple primary sources rather than relying exclusively on the synthetic, authoritative, and detached narrative of a textbook.

On this last point, teachers should not lose sight of the fact that, while old political cartoons are primary sources, opening clear windows into another time, they were created to comment on the people and events depicted, most often by use of written and visual satire, parody, and humor.

Why note this seemingly obvious point? Because surrounding a political cartoon with an elaborate array of serious analytical probes in a classroom lesson—as necessary as it might be—also endangers the patient under the scalpel. At some point in the operation being performed upon it in the classroom, it would seem worthwhile to deliberately step back and simply ask whether the cartoon is “alive,” that is, funny and why it would have been seen as funny when it was created.

Online examples of how teachers use political cartoons in the classroom: a Vietnam War-era cartoon, and cartoons about school desegregation and “massive resistance” in Virginia during the 1950s.

"Teaching with Documents: Lesson Plans” at the National Archives and Records Administration includes a cartoon analysis worksheet that can be used to help guide students into understanding historical political cartoons.

The Library of Congress has a collection of online exhibitions and presentations about political cartoons.

Harper’s Weekly, Cartoon of the Day.