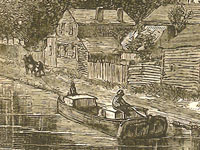 My ancestors migrated in the 1830s from Bradford County, Pennsylvania to Carroll County, Illinois. Is it likely that they used the Erie Canal and the Great Lakes to get there?

From the early 1830's, emigrants from rural northeastern Pennsylvania traveling to northwestern Illinois had two possible routes that were widely used. The most popular of these was to take the Erie Canal.

The first route: They would have loaded on a canal boat at Elmira, NY, just north of Bradford County, PA. From there they would have traveled on the Chemung Canal, completed in 1831. This would have taken them up to Watkins Glen at the southern tip of Seneca Lake. At the northern end of the lake in a portage called Geneva they would have picked up the Cayuga and Seneca Canal which was completed in 1830. This would have taken them up to the Erie Canal at Montezuma (near Cayuga), from where they would have traveled west along the Erie Canal to Buffalo. From Buffalo, they could have gone to Chicago via Lake Erie and Lake Michigan (a circuitous route of a thousand miles) on a steamboat. A route that could only be navigated when the lakes were not frozen over in the winter. After about 1833, another possibility was to get off the boat in Detroit (rather than Chicago) where they could have transferred their goods to a wagon or stagecoach which followed the Chicago Road. This path stretched from Detroit to Chicago across Michigan above its southern border and around the south of Lake Michigan.

either of two routes would have been likely

From Chicago, if it was still the very beginning of the decade of the 1830s, they could have floated up the Chicago River and portaged over to the Des Plaines River on a short draft flatboat—or they could have followed the portage route by stage or wagon, depending on the seasonal water level—and from there they could have connected with the Illinois River and floated down to join the Mississippi at Grafton, IL, above St. Louis. From there, they could have taken a steamboat north along the Mississippi to Savanna, IL, in Jo Daviess (later called Carroll) County. However, by the middle of the 1830s, when many new settlers were pushing into Illinois to find farmland, they would almost certainly have taken another route from Chicago, which was the State Road that went more or less directly from Chicago, through Elgin and Rockford, IL, and then ended at Galena, in Jo Daviess County.

The second route: They could have floated down the Susquehanna River (or used the canal system that supplemented and paralleled the river) south to Harrisburg. They would then have transferred their goods to a Conestoga wagon or a stagecoach, and from there they would have turned west and traveled across south central Pennsylvania by way of the Pennsylvania Road (the Old State Road), which went from Philadelphia to Pittsburgh. At Pittsburgh, they would have transferred their goods to a boat and floated or steamed down the Ohio River to where it joined the Mississippi River at Cairo, IL. Then north by steamboat up the Mississippi to Savanna or Galena, IL (steamboats began regular service between St. Louis and Galena in 1827).

Another less probable route existed: Depending on how much they intended to bring with them, they might have considered whether it would be cheaper to travel with their goods to New York or Philadelphia—perhaps by way of the North Branch Canal or the Delaware and Hudson Canal and by toll road—and then to ship to New Orleans. From there to transfer it all to a steamboat bound up the Mississippi River as far as Galena. This may seem like a very roundabout way; however in the early 1830s shipping a lot of freight by road over the mountains of Pennsylvania and across Michigan and Illinois was more expensive than shipping it by water around the Eastern seaboard and up the Mississippi. The completion of the Erie Canal changed the calculation.

shipping a lot of freight by road over the mountains ... was more expensive than shipping it by water
Circumstances Determined Choice of Route

Their choice of route may have taken into account what they intended to carry with them, how much they could spend on their travel, as well as the local conditions along the various routes, insofar as they could foresee them. They would also have considered their strength and health, and whether they could endure pushing a stuck wagon over a mountain road or living in a makeshift tent on the upper deck of a steamship. If they were already farmers and planned on bringing livestock, tools, and household goods to the farmland of Illinois, that would have constrained their choices in a way that prospective miners, who also flocked to the region around Galena, did not experience simply because miners were not likely to have brought any of the tools of their livelihood with them when they moved. In planning their trip, they might have picked up a copy of Illinois pioneer and Baptist missionary John Mason Peck’s, Guide for Emigrants (1836), which recommended routes for prospective settlers from the East and even lists steamboat, stage, and canal fares. Also useful in planning their trip, if they were leaving in 1837 or later, would have been a copy of Samuel Mitchell’s, Illinois in 1837.