Peruse every edition of the "official newspaper" of the U.S. Army fighting forces during World War I. 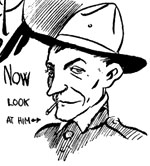 This collection presents the complete run—from February 8, 1918 to June 13, 1919—of the "official newspaper" of the U.S. Army fighting forces during World War I. The American Expeditionary Forces (AEF) were formed in May 1917 following U.S. entrance into the war. Stars and Stripes was created by order of the AEF supreme commander, General John J. Pershing, to strengthen morale and promote unity among soldiers. Professionals from the newspaper industry joined the staff, including a few well-known journalists. At its peak, the weekly newspaper reached more than half a million soldiers, providing news of the war, sports reports, cartoons, news from home, and poetry.