Scanned images of more than 18,000 pieces of sheet music, including covers, published prior to 1923. 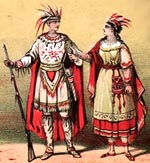 Scanned images of more than 18,000 pieces of sheet music, including covers, published prior to 1923 are presented on this website. The collection, compiled by an American musicologist, covers the period 17801980 but focuses on 19th-century popular music, especially songs relating to military conflicts, presidents, romance, transportation, and songs from the minstrel stage.

Users may search for songs on hundreds of topics such as drinking, smoking, fraternal orders, the circus, and death, or look for composers, song titles, or other catalog record data. Descriptions by the collector of significant songs in 38 topical categories are also available. These materials are useful for studying 19th- and early 20th-century popular culture, especially depictions of ethnicity, gender, and race.

Dred Scott Case
Wet With Blood: The Investigation of Mary Todd Lincoln's Cloak
The American Presidency: A Glorious Burden
The 19th Century in Print: Periodicals
The Blue and the Grey (and Red and Green and Yellow)
Civilian Public Service Story