Focuses on Mark Twain's life and career, including creation of his popular image, marketing and promotion of his texts, and live performances.

Mark Twain in His Times

Mark Twain in His Times 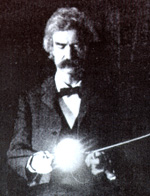 Based on Mark Twain's works and life, this engaging website focuses on the author's life and career, including the creation of his popular image, the marketing and promotion of his texts, and live performances. Five sections center on major works, including Innocents Abroad, Tom Sawyer, and Pudd'nhead Wilson. Each section is placed within a historical context.

The website offers an extensive collection of text sources, including 50 published texts or lectures, 16 letters, and over 100 texts and excerpts from other late 19th-century authors. Twenty-nine items from publishers, more than 80 newspaper and magazine articles, 35 obituary notices, over 100 period literary reviews, and hundreds of illustrations and photographs round out this informative site. An interactive graphic essay explores the issue of racism through various American illustrations of "Jim" in Huckleberry Finn. This is an invaluable resource for studying American literature and its place within the 19th-century marketplace and landscape.