Say it Plain: A Century of Great African American Speeches

Say it Plain: A Century of Great African American Speeches 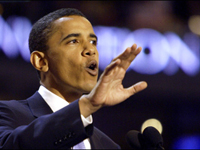 Topics include Washington's speech to the 1895 Atlanta Cotton States and International Exposition, Bethune's 1939 speech "What Does Democracy Mean to Me?," a 1966 speech by Carmichael at U.C. Berkeley, and King's 1968 "I've Been to the Mountaintop" sermon delivered in Memphis just before his assassination. The speech by Marcus Garvey is his only known recording. Each speech is accompanied by a brief introduction. The site provides 40 links to related websites.