Contradictions in John Fremont's Political Chart of the US (1856) 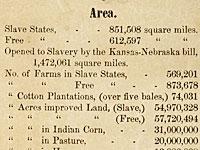 The question concerns John Frémont's Political Chart of the United States (1856). Typically, we think of the north as being more industrialized at this point and the south as more agricultural. Yet, under the heading of area on the right of this document the following information is included: No. of farms in slave states  569,201; No. of farms in free states  873,678.

The period during which Frémont's chart appeared was one of rapid industrialization and urbanization in the Northeastern states. Economic historian Douglass C. North has identified the 1840s and early 1850s as the era in which "the pace of industrialization accelerated to the degree that the Northeast could unequivocally be called a manufacturing region."

The chart explicitly referred to "free states," not states in the North or Northeast. During this period, the number of farms in the developing area that we now call the Midwest—which with the exception of Missouri was composed solely of free state—increased at a faster pace than in any other region of the nation due to the increasing ability of persons of modest means to purchase newly available, relatively small plots of public land. These new farms tended more and more to be oriented to the market rather than to self-sufficiency. The concurrent rise in urban population in the Northeast was closely related to the growth of agriculture as a commercial enterprise in the Midwest. As cities grew, so did a demand for food that Midwestern farmers supplied. A closer look at the statistics and at the analyses of agricultural and economic historians will help make further sense of the situation.

The number of farms listed on Frémont's chart was derived from the 1850 census (with one small discrepancy—while the chart lists 873,678 farms in free states, the total calculated from the census actually comes to 873,608). According to census figures, New England states (Maine, Vermont, New Hampshire, Massachusetts, Rhode Island, and Connecticut) accounted for 19 percent of the farms in free states, or 167,651 farms; Middle Atlantic free states (New York, Pennsylvania, and New Jersey) totaled 37 percent or 322,103 farms; and the Midwestern free states (Ohio, Indiana, Illinois, Michigan, Wisconsin, and Iowa) 44 percent or 382,982. (The census listed only 872 farms in California, the only state in the far west that had been admitted to the Union by that time.) New York led the free states in number of farms with 170,621. Ohio, the first Midwestern state to be settled, came in second with 143,807. Pennsylvania followed with 127,577, Indiana had 93,896, and Illinois 76,208. In the slave states, Virginia had the most farms with 77,013, followed by Kentucky with 74,777, Tennessee with 72,735, North Carolina with 56,963, Missouri with 54,458, and Georgia with 51,759.

The Business of Agriculture

During the decade of the 1850s, the total number of farms in the U.S. increased by 41 percent, from 1,442,908 to 2,030,785 farms. Nearly half of the new farms were located in the free states of the Midwest. In his classic work of U.S. agricultural history, The Farmer's Age: Agriculture, 18151860, Paul W. Gates stated that the "rush for the public domain" during the 1850s "surpassed anything in previous history." Gates attributed the rise in land sales to lower prices and to "[f]rantic railroad building, particularly in the upper Mississippi Valley; the great influx of Germans, Scandinavians, and Easterners into the West; and a new era of banking experiments which greatly increased available credit." Historians have identified this period as part of an "agricultural revolution" that eventually led to the passage of the Homestead Act of 1862, through which homesteading settlers could obtain 160 acres of public land free of charge.

The revolution, which encouraged land speculators in addition to settlers, marked a major shift in agricultural practice in the free states, as "by the 1850s, market-oriented agriculture was firmly established as the dominant approach, clearly distinguishable from the semisubsistence approach," according to agricultural historian Clarence H. Danhof. Economic historian Harold D. Woodman has characterized the "large class of property owners on western lands" during this period as consisting "neither of peasant proprietors nor of yeoman farmers but, rather, of businessmen on the make."

Two visions of the nation's future had dominated early legislative initiatives regarding land sales from the federal government, which under the Articles of Confederation had acquired all state-owned lands west of the Appalachians. Alexander Hamilton and his Federalist followers believed that prices for public land should be set at high levels both to benefit the U.S. treasury and to discourage agriculture in favor of manufacturing endeavors. In contrast, Thomas Jefferson and like-minded politicians, who envisioned a republic of yeoman family farmers, sought low prices for small lots of land that could be purchased on credit by people of average means.

Federalist policy prevailed in early land sales legislation; in 1790, the minimum cost for land purchased from the government was set at $1,280 and the minimum amount sold was set at 640 acres. Due to poor sales, later legislation gradually relaxed maximum and minimum terms, so that by 1820, the minimum price of an acre had dropped from a high of $2 to $1.25 and the minimum amount that could be sold was lowered to 80 acres. In 1832, this amount was reduced further to 40 acres, and by 1854, the minimum price for public land that had remained unsold for more than 30 years was lowered drastically to 12 ½ cents per acre.

Frémont's Midwestern supporters, who put together the chart, were part of a growing movement of farmers who "broke politically with southern planters in the 1850s," according to agriculture and economics professor Willard W. Cochrane. These farmers, Cochrane has written, "came to resist the extension of slavery and the plantation system out of fear of competition from large plantation units based on slave labor with their small family-sized units." In order to survive during the transition to market-oriented farming, they allied themselves more with economic interests in the Northeast than with planters in the South. "The stage was thus set for the realignment of political power, the founding of the Republican party, and the eventual War between the States," Cochrane concluded.

A detailed copy of the chart, from the Chicago Historical Society, is online at the Lincoln at 200 website.

Agriculture of the United States in 1860: Compiled from the Original Returns of the Eighth Census., under the direction of the Secretary of Interior, by Joseph C. G. Kennedy, Superintendent of Census. Washington: Government Printing Office, 1864.

Jeremy Atack and Fred Bateman, To Their Own Soil: Agriculture in the Antebellum North. Ames: Iowa State University Press, 1987.

Historical Statistics of the United States: Colonial Times to 1970, Bicentennial ed. Washington: U.S. Dept. of Commerce, Bureau of the Census, 1975.