Witness the growth of the Chicago metro area with this interactive website. 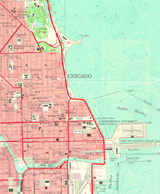 Dedicated to "enhancing knowledge about the built environment of the Chicago region," this site hopes to offer a comprehensive "system for indexing, storing, retrieving, comparing, and analyzing images, maps, data, literature, and other geographically-based materials" on Chicago.

Contains an array of historical and recent maps, photographs, and illustrations, plus textual information about Chicago's history and architecture.

An animated map shows the city's expansion and the development of neighborhood communities from 1850 to 1990.