Washington was once part of an area contested for between the U.S. and Great Britain. 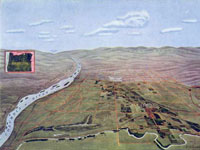 The nearly 1,000 maps available on this site document the conflict between Great Britain and America for ownership of the region. They also illustrate the transformation of the physical boundaries of the Pacific region and the efforts of its inhabitants to control the land. The site includes a valuable interactive timeline that presents the maps in historical perspective. The collection contains large-scale geographic maps of the land and sea and small hand-drawn sketches of settlements. The maps are very detailed and most were created in the late-19th- and early-20th-century. Maps are primarily concerned with geography, transportation, climate, population, culture, politics, and tourism and there is a searchable index that is organized according to 21 themes, such as forests, Puget Sound, railroads, Seattle, Washington State University, and Native American reservations.

A drop-down menu allows users to examine and enlarge thumbnail images of each map. Biographical and detailed descriptive text (most between 20 and 500 words) is presented with each image, and the text is searchable by keyword. Created as a resource to help students, teachers and researchers understand the history and development of the state of Washington, this site will appeal to those interested in Washington, historical geography, and the development of cartography.