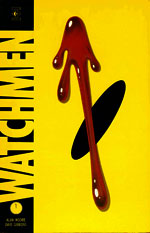 Earlier this summer, Clearinghouse staff members shared some ideas for summer reading. In this installment, other staff members highlight their choices—a graphic novel, a maritime log book, film, and a political thriller.

If you've been in a bookstore lately, you've undoubtedly noticed sections and shelf space devoted to the graphic novel. Research Associate Lara Harmon is a fan of Watchmen, a 450-plus page graphic novel first published in the mid-1980s and released as a film in March 2009. One reviewer described Watchmen as the Citizen Kane of graphic novels, a multi-layered narrative that has not dulled with age. Lara agrees. "It changed perceptions of the comic book as a medium and remains a tightly-plotted, cynical look at politics, science, war, and human nature."

She recommends that educators look at how the story and characters treat Cold War anxieties, the Vietnam War, and issues of American world status and power following Vietnam.

Chris explains, "It's part history of the settlement of the American West, part environmental study of people sustainably living in essentially the desert that is the West. The first half is a dramatized version of the settling of towns like Los Angeles and how speculators and politicians destroyed entire towns just to create water sources for the city. The second half looks at policy and ways to change current policies to make the west sustainable."

Great minds look at films as history and culture.

Chris also recommends Roger Ebert's Book of Film: From Tolstoy to Tarantino, the finest writing from a century of film. This anthology explores the history of films and how critics, authors, and others have written and talked about them. Chris sees this as a great source of film history and theory.

Research Assistant Alaina Harmon recommends Logbook for Grace: Whaling Brig Daisy, 1912-1913 by Robert Cushman Murphy, first published in 1947. The Daisy was a whaling ship, and Murphy, an ornithologist and former curator of birds for the American Museum of Natural History, sailed with her to the sub-Antarctic to observe and collect oceanic birds. During a four-month stop to hunt elephant seals, he collected specimens of penguins, other birds, marine mammals, and plants later deposited in the Museum of Natural History.

Murphy's log entries are partly letters home to his wife.

Murphy comments on his own activities, the processes of whaling and blubber harvesting, and life at sea, periodically sending the manuscript home to his wife, Grace, to keep her informed about his travels. Alaina comments, "As a logbook, this is a great read, since maritime logs written by sailors are far more likely to list weather, current navigational standing, any crew punishments or exasperations of the writer, whale sightings or killings if relevant, and occasional poems or lyrics. The sailing logs are fantastic for research, but Murphy's book benefits from its triple focus: maritime history and life, zoology, and museum practice."

Pondering questions about power, corruption in high places, conspiracy theories, and political vigilantes? For a change of pace and an entertaining read, suspend your critical thinking skills for this political thriller. Multimedia Associate Misha Vinokur recommends Term Limits by Vince Flynn. "It's an answer to just what could happen when ex-military commandos decide to rid Washington of corrupt officials."