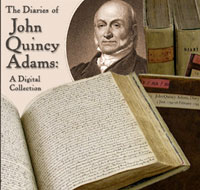 Here's a creative possibility to bring your students into the often-obscure primary source materials of the late-17th and early-18th century. Although perhaps not ROTFLOL.*

Recently a graduate student from Boston's Simmons College visiting the Massachusetts Historical Society noticed that short, line-a-day entries in the diaries of John Quincy Adams, sixth president of the United States, read an awful lot like messages on Twitter.

According to The Beehive, the official blog of the Historical Society, Adams kept multiple diaries simultaneously and filled 51 volumes over 69 years. For the most part, the line-a-day entries are found in a single volume covering the years 1795 through 1801, then 1809 to 1836.

So, historians decided to extend the outreach of the archives and gave Adams his own Twitter feed. They currently post a daily entry taken verbatim from the Adams diary. Current entries for September follow his journey to St Petersburg begun in August 1809 as America's first Russian ambassador (or Minister Plenipotentiary, as the title was at that time). The posts link to maps tracing his travels, his reading lists, and to other diary entries digitized on the Historical Society website. Adams's Tweets are generally shorter than Twitter's 140-character limit, and as an added bonus, the digitized diaries reveal that unlike many of his compatriots, Adams's penmanship was impeccable and, therefore, largely readable.

*ROTFLOL: Rolling on the Floor Laughing Out Loud