Bookmark This! Teachers, Teens, and Technology 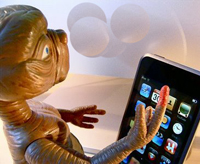 Summer vacation is near. For many, less structured days might also mean more time spent cruising around the web or maybe twittering, blogging, flickr-ing and otherwise networking or building cyber-projects. How DO we use technology? A few recent surveys among teens and teachers offer perspective.

At ESchool, the article Survey reveals gaps in school technology perceptions, reports the results of Unleashing the Future a massive, nationwide survey about the use of emerging technologies for learning.(You may need to register to read—it's free.) Students, according to the report, use technology to personalize their own education. Which educators are the most fervent proponents of technology in education? District administrators are the strongest promoters—both for collaboration among teachers and as instructional tools. (Follow the survey link in the first paragraph for the full report.

Text-messaging is the number one communication tool for most teenagers.

The Pew Research Center article, Millennials, Media and Information explores teen use of cell phones, laptops, social networking, and the internet in general to communicate with each other and to learn about what's happening in the rest of the world. This video and transcript of a conference moderated by journalist Judy Woodruff at the Newseum in Washington, DC, looks at how teens get news and communicate and at the pluses and minuses of these channels of communication. (February 2010)

Also from Pew Research Center: Teens, Cell Phones and Texting, probes cell phone use among teens: who's using them, who's paying for them, and what teens think about them.

Simultaneously, Social Media & Mobile Internet Use Among Teens and Young Adults reports that blogging is down, texting is up, and twittering hasn't yet seen huge use among teens.

And from Nielson, How Teens Use Media (June 2009) reinforces the importance of text messaging and offers some perhaps surprising evidence that teens spend less time online that we might expect.

Do these reports give insights into how to teach history? Maybe. They offer clues about the potential of tech tools to engage, guide, and assess students —and to a great extent, 21st-century skills are entwined with appropriate use of these technologies. Visit the Roundtable discussion 21st-Century Skills and the Learning of History at teachinghistory.org, read what educators such as Fritz Fischer, Jill LePore, and Edward Ayers have to say, and add your own point of view.